Reserve Bank governor Philip Lowe is hoping for his goldilocks pain moment for interest rates – enough hurt to curb consumers’ current level of spending but not a level of pain that will have the economy gasping for morphine.

If the RBA manages this balancing act and doesn’t get toppled by imported inflation then Lowe will achieve his prediction on Tuesday that Australia will avoid a recession. At least that’s the plan. 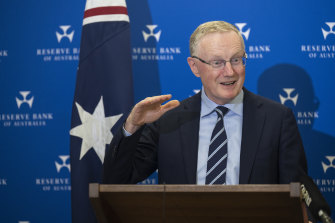 That said, Lowe was blunt and admitted there will be pain inflicted on households with borrowings as rates continue to rise.

No pain, no gain.

Rates need to rise sufficiently to hit those borrowers who are comfortably cashed up with a buffer of a combined $250 billion in savings squirrelled away during COVID. ( Lowe said that at the moment the number of people falling behind on home loan repayments is actually declining.)

But he admitted rate rises needed to dampen demand and would create collateral damage for more vulnerable borrowers who scraped into the housing market at its peak and don’t have a layer of financial fat.

The RBA’s view is that inflation will peak in Australia at 7 per cent in December but that it will start to move down in 2023.

But he did cover off on some broad parameters on interest rates and the trajectory of inflation. Firstly, he believes it is unlikely the cash rate will rise to 4 per cent by the end of the year – the amount being factored in by markets.

Lowe noted this would require the interest rate to be increased by 50 percentage points each of the next six months and at this point it appears this is a bridge too far for the RBA.

The clear message is that the central bank doesn’t think it will need to go that hard to tame inflation and that the negative repercussions of heavy-handed rate hikes (equivalent to the sharpest monetary tightening in Australia’s history) could make the treatment worse than the disease. Last week he indicated to markets that taking the cash rate to around 2.5 per cent might be the sweet spot.

The second piece of near term, and therefore reliable, intel from Lowe is that when the RBA board meets again in early July it will be tossing up between a 25 basis point rise and a 50 basis point rise in rates. And this is important because a number of market economists were pencilling in a 75 basis point hike.

Fighting inflation is the RBA’s number one job and its focus will be to get that down to within the central bank’s target band of 2 to 3 per cent – an outcome Lowe forecast it could take years to achieve.

The RBA’s view is that inflation will peak in Australia at 7 per cent in December but that it will start to move down in 2023.

This assumes the rate rises that Australians will experience for the remainder of the year will tame demand significantly. Lowe is also forecasting that the COVID hangover supply shortages will begin to ease, noting that there is already some evidence that this has begun. That said, the supply deficits are beyond the control of the RBA.

It is important for the RBA to jawbone the population into seeing the current inflation spike as aberrant rather than the new normal.

The psychology of inflation expectations is critical to the RBA response. It wants to avoid seeing wages inflation introduced to the mix of issues it needs to fight. While wages growth has been depressed for several years, it is now beginning to pick up and the minimum wage has just been raised 5.2 per cent by the Fair Work Commission.

Lowe would like to see pay rises with “a three in front of them”, he said on Tuesday in a none too subtle message to the new Albanese government that would come with a sigh of relief for business.

The fact that unemployment is at record low levels is both one of the reasons Lowe is confident we can avoid recession and a reason to be concerned about wage inflation.

While it’s comforting to know that the RBA can see inflation’s peak and the avoidance of a recession, Lowe is only too willing to admit that the past two years had taught the bank “you can’t rule anything out”.