The global shortage of the chemical compound urea that is threatening Australia’s entire logistics system provides a disconcerting insight into the complexities and distortions of global supply chains in this pandemic.

Urea is crucial for the nation’s transport sector as it’s key to the availability of the diesel exhaust fluid AdBlue, which is made from the compound. Its shortage has sent the federal government scrambling to secure supplies to avert a shutdown of the trucking industry that is critical to the movement of goods around the country.

The simple explanation for the sudden shortfall in the supply of the compound is that China and Russia, two of the world’s major suppliers, are restricting exports. 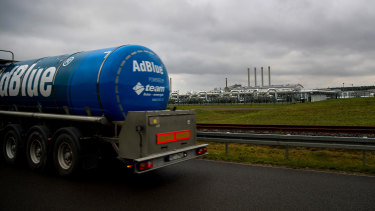 The AdBlue crisis is a sign of the larger supply and demand struggles in this pandemic.Credit:Bloomberg

The more sophisticated version illustrates how a myriad of factors has caused the broader problems bedevilling global supply chains since the pandemic began.

Urea is the end product of a process that uses coal or gas to produce ammonia, from which synthetic urea is then derived. Unfortunately for drivers of trucks and diesel cars, about 85 per cent of the ammonia produced globally is used as fertiliser.

The decision by China and Russia to restrict exports of urea was made to protect the supply of fertilisers for their farmers and ensure food security for their people in the process.

The soaring prices of gas and coal, which have produced energy crises in Europe and China, have played a major role in this.

Factories in China and Europe were forced to shut down or restrict production to ration power or avoid operating at a loss. The surge in power prices hit the electricity-intensive fertiliser production and generated a surge in the price of fertilisers to record levels.

Ammonia and urea prices have more than doubled and the price of another form of fertiliser, potash, has risen more than 70 per cent this year.

Beyond its impact on AdBlue, the soaring costs of fertilisers will lead to lower production levels and increase food prices globally.

It’s no coincidence that a key component of the “strategic baseline” China’s leadership set for 2022 last week was to secure supplies of agricultural commodities. China is concerned about food security.

Imbalance of supply and demand

The factors behind the energy crunch that has hit Europe and China particularly hard are many and varied – weather, including hurricanes in the US that damaged key chemical complexes, OPEC’s supply constraints, China’s ban on Australian coal, a cutting back of investment in new production during the pandemic and the global push to decarbonise. But ultimately, they come down to an imbalance of supply and demand.

That imbalance is at the heart of the wider problems afflicting global supply chains.

Supply was, and still is, disrupted by the pandemic. With shutdowns and labour shortages throughout the supply chains — from factories through to containers, ports and distribution at the end destinations — there have been pandemic-driven shortages of capacity.

In China, with the Beijing Winter Olympics looming early next year and its leadership determined to showcase clear skies, it is likely there will be more factory closures in key production centres close to the capital ahead of the Games, adding another source of disruption to supply.

On the other side of the equation demand – fuelled by unprecedented global fiscal and monetary policy stimulus – has soared.

Consumer behaviour has been changed by the pandemic and the lockdowns that occurred in response to it. Consumers have gone on a spending binge that perhaps reflects a pandemic-induced shift in work-life balances, along with changed working habits.

The most dramatic illustration of those developments – and one with real geopolitical consequences – is the global shortage of semiconductors that has curtailed production of cars and electronic products.

The world’s reliance on Taiwan for the chips, particularly for the advanced chips that will power the key technologies that will shape this century including military technologies, has been exposed. China’s increasingly aggressive posture towards Taiwan underscores the world’s vulnerability to that dependence.

Global supply chains weren’t prepared for such abrupt and significant changes in supply and demand. For decades, companies have been trying to source from the most efficient producers around the world. Globalisation turned China into the world’s manufacturing base.

Global supply chains had become so efficient and reliable than it enabled the almost universal adoption of the “just in time” approach to inventories pioneered by the Japanese in the 1970s, which allows companies to reduce the amount of working capital they have tied up in stock – but leaves limited amounts of product available if the supply chain doesn’t function seamlessly.

The logistics issues within the supply chains are gradually being resolved, although the pandemic, and China’s “COVID-zero” approach to it, are still sources of disruption, as are labour shortages in developed economies.

In time, the supply chains will be rebuilt, but they will reflect the experience of the pandemic and a geopolitical backdrop that continues to evolve as the tensions between China and the US and other like-minded democracies continue to rise.

More onshoring of critical goods, whether medical, industrial or technological, is occurring now that governments are aware of their vulnerabilities. Government subsidies of the manufacturing of key products and technologies are becoming more prevalent.

The cost of some goods, whether of national strategic significance or simply central to an industry’s ability to function, will rise as security of supply becomes more important than cost.

The protectionism that characterised the Trump presidency in the US is gaining traction, and not just in the US. National security is being used, not just to respond to the effects of the pandemic, but as justification for industry policies that reflect the heightened geopolitical tensions. That will add another layer of deglobalisation, and cost.

It is improbable that, as the pandemic passes or its effects are at least brought under control, global supply chains will revert to what they once were.

The pandemic and the collision between China’s ambitions and America’s desire to protect its economic and political hegemony almost guarantee significant change.