Virus will hit economy hard, but too soon to say how hard

To judge by the gyrations of the world’s sharemarkets, the coronavirus has us either off to hell in a handcart or the markets are panicking about something bad that’s happening, but they’re not sure what’s happening, how long it will last or how bad it will end up being. I’d go with the latter.

So would Reserve Bank deputy governor Dr Guy Debelle. He said in a speech this week that there’s been a large increase in the financial markets’ “risk aversion and uncertainty”. 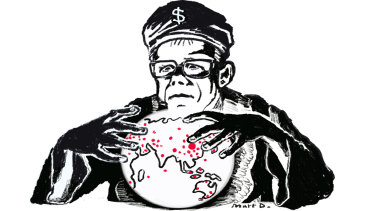 The Reserve Bank deputy governor Guy Debelle is as much in the dark about the economic impact of the virus as the rest of us. Illustration: Matt DavidsonCredit:

"The virus is going to have a material economic impact but it is not clear how large that will be. That makes it difficult for the market to reprice financial assets," he said.

That’s central-bankerspeak for "they’ve got no idea what will happen". Which is hardly surprising, since no one else has, either. More from Debelle’s speech as we go.

But understand this. Farr’s law of epidemics, developed in the mid-19th century, says that the number of cases of a new disease rises and then falls in a roughly symmetrical pattern, approximating a bell-shaped curve.

Depending on how quickly the disease spreads, the bell can have a steep rise and fall or a shallow one. Epidemiologists seek to make the bell as shallow as possible by slowing the disease’s spread. This allows the health system to avoid being overwhelmed – reducing the likelihood of panic and chaos, and making it more likely those who most need medical attention get it. 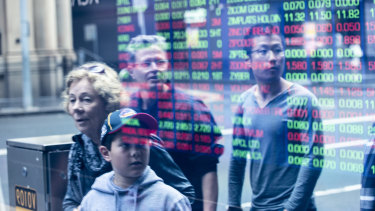 Sharemarkets around the world are being hit by devastating losses.Credit:Louie Douvis

In theory, it allows more time for the development of a vaccine or useful drugs, but the World Health Organisation has said it will take about 18 months for a coronavirus vaccine to be widely available.

At this stage, the main way of slowing the spread is "social distancing" – reducing the contact between people by cancelling sporting events, closing schools or workplaces or ordering people to work at home. Of course, many people are doing their own social distancing by staying away from restaurants and bars.

The virus has now arrived in most countries. Its spread is well advanced in China, Iran, Italy and South Korea, but much less so in Singapore and Hong Kong, where the authorities got in earlier with their social distancing measures.

Such measures, however, cause considerable inconvenience, especially to parents, and disruption to the economy – both to the production of goods and, more particularly, services, and to their purchase and consumption. Not to mention the associated loss of income.

Some of this economic activity may merely be postponed – so that there’s a big catch-up once the epidemic subsides. But much of it – particularly the performance of services (if you miss a restaurant meal or a haircut you don’t catch up by having two) – will be lost forever.

Obviously, China is central to the story for both the world economy and ours. China’s economy was hit hard by the virus and the drastic but belated measures to slow its spread, though the number of cases does seem to have passed its peak and rapidly declined. Debelle said "the Chinese economy is now only gradually returning to normal. Even as this occurs, it is very uncertain how long it will take to repair the severe disruption to supply chains."

The globalisation of the world economy in recent decades is a major part of the story of this virus. It means people in any part of the world are almost instantly informed about unusual things happening anywhere else in the world. It’s good to be better informed, but sometimes it can be frightening.

For another thing, globalisation has greatly increased the trade between countries, particularly trade in services, such as tourism and education. Trade in services has been greatly facilitated by the emergence of cheap air travel.

It’s all the overseas air travel everyone does these days that has caused epidemics that break out in one part of the world to spread around the world within a few weeks. More pandemics has become one of the big downsides of globalisation.

And when governments try to limit the spread of a virus by banning people from countries where the virus is known to have spread widely, this disrupts and damages those of that country’s industries who sell their services to foreign visitors.

(When the government stops you supplying a service to willing buyers, economists classify this as a shock to the "supply side" of the economy. When your sales fall because customers become more reluctant to buy whatever you’re selling, that’s a "demand-side shock" to the economy.)

Our imposition of a ban on non-residents entering Australia from China has hit our tourism industry and our universities. Debelle said that, since January, inbound airline capacity from China has fallen by 90 per cent. Until recently, he said, tourist arrivals from other countries had held up reasonably well, "but that may no longer be true".

The Reserve estimates that Australia’s services exports will decline by at least 10 per cent in the March quarter, roughly evenly split between tourism and education. Since services exports account for 5 per cent of gross domestic product, this suggests the travel ban will subtract 0.5 percentage points from whatever growth comes from other parts of the economy during the quarter.

Another consequence of growing globalisation is the emergence of "global supply chains" – the practice of multinational companies manufacturing the components of their products in different countries, before assembling them in one developing country and exporting them around the world.

China is at the heart of the supply chains for many products. So Debelle’s remark about the delay in repairing "the severe disruption to supply chains" is ominous. The Reserve’s business contacts tell it supply chain disruptions are already affecting the construction and retail industries – but there’s sure to be more of this "supply-side shock" to come.

And the shock to demand as – whether through virus-avoidance, necessity or uncertainty – consumers avoid spending money, has a long way to run. But, Debelle said, it’s "just too uncertain to assess the impact of the virus beyond the March quarter".

Ross Gittins is economics editor for The Sydney Morning Herald and The Age.