Bendigo confident on mortgage expansion as market roars back

Bendigo and Adelaide Bank is confident of carving out a bigger share in mortgages as the housing market roars back, after low bad debts drove a surprise lift in profit, sending its share price soaring.

Chief executive Marnie Baker on Monday said the regional lender could continue expanding its share in the crucial home lending market, as she also played down concerns of house prices overheating. 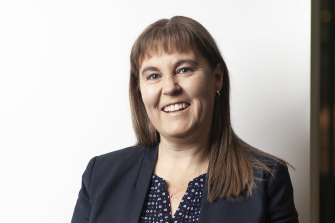 The comments came after Bendigo’s profit beat market expectations with 1.9 per cent growth in cash profit to $219.7 million, helped by surprisingly low charges for bad debts in the December half.

The results sparked an 11.8 per cent surge in Bendigo shares to $10.61, as rival banks’ share prices also enjoyed a strong day.

With banks all targeting mortgage borrowers as the housing market strengthens, Bendigo’s home loan book expanded by 14 per cent in the half, which was more than three times the average pace across the industry.

Ms Baker said the bank could continue to grow its loan book faster than the market, pointing to work it had done to speed up loan approval times and its relationships with mortgage brokers.

“We believe it is sustainable,” Ms Baker said. “We think we’ve got the ingredients right.”

In the latest upbeat commentary on the economy from a senior banker, Ms Baker said customers were showing “remarkable resilience and adaptability,” and the bank was also buoyed by improvements in regional Australia, the labour market and property prices.

With economists tipping strong house price growth for this year and next, Ms Baker said she was unconcerned about the risks of house prices and household indebtedness overheating. She said many customers were flush with savings, and price growth was being driven by owner-occupiers and government stimulus, rather than investors.

“This is people taking advantage of a low-rate environment [and] government stimulus… to actually either upgrade their house or buy a house,” she said.

While markets last year worried banks would face a wave of soured loans, Bendigo’s bad debt charges in the half were only $19.5 million, much lower than market expectations and down sharply from the June half.

Shareholders will receive a fully-franked dividend of 28¢ a share, as well as a 4.5¢ payment for the second half of last year, to be paid on March 31. The board had previously deferred a decision on the final dividend last year, citing the uncertain economic environment.

Jefferies analyst Brian Johnson said the key surprise in Bendigo’s result was the low bad debt charge, which reflected the improving economic backdrop in Australia during the second half of 2020.

“It’s a massive earnings beat,” Mr Johnson said. “Notwithstanding we are now entering another lockdown in Victoria, Australia seems to be existing from COVID stress.”

UBS analyst Jonathan Mott described the bad debt charge as “very low,” and it explained why the bank had beaten the market’s expectations on earnings. Mr Mott said the results showed the bank was managing its deposit rates well to support its net interest margins.

Ms Baker echoed the sentiments of other banks in her comments on the government’s plan to roll back responsible lending obligations on banks, vowing this would simplify loan applications, but increase customers’ borrowing capacity.

“It won’t have any effect on the credit underwriting standards of banks because it’s actually not aimed at that,” she said.