The cousin of alleged fraudster Bill Papas has defended receiving $720,000 from the colourful soccer identity’s share trading account in breach of freezing orders, saying the transfers were to pay legal fees and loan repayments.

Eric Constantinidis, Mr Papas’s cousin and the son of Paul Keating’s former piggery business partner Achilles “Big Al” Constantinidis, was named as a defendant in the civil case brought by Westpac against Mr Papas and his business Forum Finance after liquidators noticed money had been transferred from Mr Papas’ trading account to his cousin. 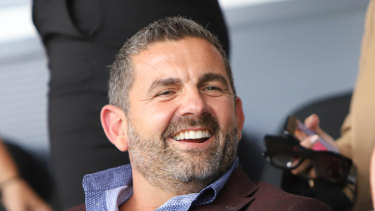 Bill Papas has been in Greece since June 21.Credit:Xanthi

Westpac and two other lenders, Sumitomo and Societe General, have accused Mr Papas and Forum of orchestrating a $500 million fraud on the banks by forging the signatures of executives at the banks’ blue-chip clients on loan documents. Mr Papas fled to Greece and has since stopped all communication with his lawyers and the court. Mr Constantinidis is not accused of having any knowledge or involvement in the alleged fraud. His company was the successful purchaser of a small part of the wider Forum group from administrators.

The unusual trading activity in Mr Papas’s account, which held millions in shares in Australian and US companies, was first revealed by The Age and Sydney Morning Herald last year.

The court issued an arrest warrant for Mr Papas late last year after Westpac raised its concerns that Mr Papas had breached freezing orders by making the transfers.

Westpac has alleged that Mr Constantinidis accepted transfers from Mr Papas despite knowing his cousin was subject to freezing orders over his assets, pointing to the vast amount of press coverage of the case since it was launched by Westpac on June 28. The court placed freezing orders over Mr Papas’ assets in Australia on June 28.

The transfers between Mr Papas’ share trading account and Mr Constantinidis took place on July 1 and July 6, according to court documents.

In new documents made available by the court on Friday, Mr Constantinidis admitted he received two payments – one for $150,000 and another for $570,000 – from Mr Papas’ share trading account but said he was unaware at the time of the allegations against Mr Papas.

“[Mr Constantinidis] was unaware of the freezing orders against Mr Papas or of any of the allegations in these proceedings,” the court documents from his lawyers say.

“The payment of $150,000… was a reimbursement of two payments made by [Mr Constantinidis] on Mr Papas’ behalf on July 1.”

Mr Papas is no longer represented by Panetta Law or Fortis Law. The case continues.