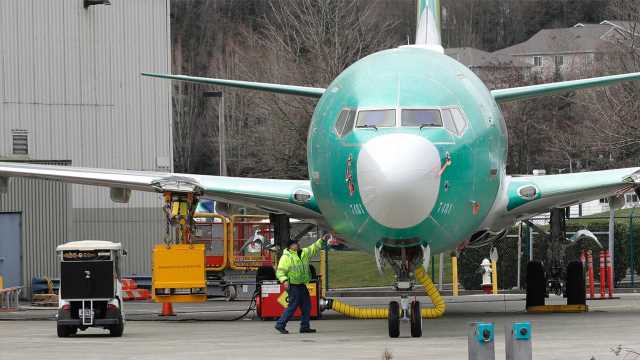 Fox Business Briefs: Boeing says it plans to stockpile more 737 Max parts than in the past to guarantee order flow for suppliers; study from Northeaster n University finds smart speakers can be accidentally activated up to 19 times a day.

U.S. air-safety regulators are poised to order electrical wires relocated inside Boeing Co. 737 MAX jets in the latest complication and potential delay for their return to commercial service, according to people briefed on the deliberations.

The preliminary decision, which hasn’t been reported before, covers all of the nearly 800 MAX airliners produced so far. The decision could be affected by further internal discussions and additional data the plane maker may submit to the regulator.

But in the past few weeks, these people said, Federal Aviation Administration managers and engineers have concluded that the potentially hazardous layout violates wiring-safety standards intended to prevent dangerous short-circuits.

Under extreme circumstances, wiring failures could cause flight-control systems to sharply point down an aircraft’s nose in a similar way to the automated maneuvers that brought down two MAX jets and claimed 346 lives.

The Chicago plane maker, according to people briefed on the details, has argued that the current wiring design meets FAA and international safety standards. Boeing also has told the FAA that because the risks are so remote—and such a relatively small number of similar short-circuits have occurred during the extensive history of the MAX’s predecessor model—no wiring redesign is necessary.

The emerging agency view, however, is based on longstanding regulations put in place following electrical fires and fuel-tank explosions on commercial jets over decades.

The FAA’s move caps several months of behind-the-scenes maneuvering between Boeing and the FAA that already has delayed crucial flights needed to vet fixes to MAX flight-control software and move forward with certifying the grounded jets as safe to carry passengers again.

Complications stemming from mandatory wiring changes could delay FAA directives ungrounding the beleaguered fleet for at least several weeks, some of the people said, potentially beyond the mid-June timeline previously projected by industry and government officials.

The wiring concerns also have turned into a test case of what Dave Calhoun, Boeing new chief executive, has touted as his more realistic and conciliatory approach toward FAA safety demands before allowing the MAX fleet back in the air.

The FAA said on Sunday that it continues to engage with Boeing on the wiring issue and the MAX will return to service only after the FAA is satisfied that all safety-related issues are addressed.

A Boeing spokesman said that discussions with the FAA continue, but regardless of the outcome the company’s estimate for a midyear return to service is unchanged.

If Boeing continues to press its case in the face of the FAA’s preliminary decision, one of the people briefed on the deliberations said, the likely upshot would be months of additional debate involving the FAA and foreign regulators in Europe, Canada and Brazil.

That is a major reason Boeing, which already has been devising ways to relocate certain wiring, ultimately is likely to accept the FAA’s position. And from a public perception standpoint, the people said, U.S. authorities are loath to break with demands from foreign regulators that wiring fixes must be completed before the fleet is allowed to resume operations.

Canadian regulators haven’t taken an official position yet on how Boeing should mitigate any risks associated with the wire bundles, said Nicholas Robinson, Transport Canada’s director general of civil aviation. But privately, according to people familiar with the details, Canada strongly supports relocating some wires.

“We’ve expressed our concerns to the FAA,” Mr. Robinson said in an interview at an aviation event in Washington, D.C., last week. “We’ll look at the FAA’s solution,” he added, “and then we’ll evaluate if that meets our needs.”

WSJ contributed to this article.