Thousands of customers a day are contacting the Commonwealth Bank's hardship department to request a deferral in their mortgage, personal loan or credit card repayments, as lenders scramble to divert staff to handle the surge in incoming calls.

Westpac, National Australia Bank and ANZ Bank also reported a jump in requests for help, after banks last week said consumers and small businesses hit by the coronavirus fallout could delay repayments by up to six months. 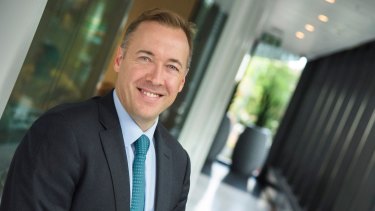 Angus Sullivan, head of CBA’s retail bank, said the bank expected to approve the “vast majority” of requests to have repayments deferred.Credit:

CBA's group executive for retail banking, Angus Sullivan, said the number of calls for help from customers was three to four times higher than normal levels, amounting to "a couple of thousand" calls a day in the division he runs.

"As you’d expect we’re seeing a high level of interest in those offers being available to customers," Mr Sullivan said in an interview with The Sydney Morning Herald and The Age.

"It’s obviously a pretty serious situation. And there are customers, I think especially those in the very near-term who are affiliated with small businesses or those sectors of the economy like tourism that have been hardest hit, who are looking for some form of relief,” he said.

In response, Mr Sullivan and other bankers are urging customers to apply for help online. Lenders are also putting on extra staff to work through the backlog, with CBA looking to hire about 500 people.

A NAB spokesperson said the bank had experienced an "overwhelming" response, with a 110 per cent increase in incoming calls and a new online application for assistance being lodged with the bank every 10 seconds.

Westpac has added an extra 50 staff to deal with the influx and plans to add more. Westpac chief executive of consumer banking, David Lindberg, said there was "strong" demand for its support package. "This is an unprecedented crisis for Australia and we are committed to using our scale, strength and experience to support our customers," he said in a statement.

An ANZ spokesman said the bank had experienced a surge of up to 400 per cent in incoming calls compared with usual from small businesses and consumers. The bank has also put on 80 extra staff, he said.

Mr Sullivan said many of the requests for relief were from people who work in hard-hit sectors such as tourism, and the bank expected to approve the "vast majority" of the repayment deferral applications.

He said the pandemic had so far had a “very modest” impact on applications for new home loans. While stressing it was very early in the pandemic shock, he said it was "reasonable to presume" that momentum in the housing market would be affected.

"We’re certainly working on the basis that we might see a cooling off of the intensity that we saw over the last month or two, as this plays out," Mr Sullivan said.

The major banks are also grappling with staff shortages, as more parents need to stay home to look after children. Mr Sullivan said seven CBA branches were shut on Tuesday, six of those in Victoria and Tasmania, while other banks have acknowledged a small number may need to shut temporarily because of staffing shortages.