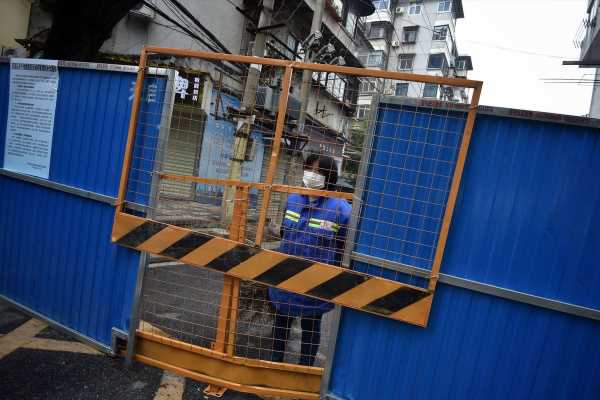 Sign up for Next China, a weekly email on where the nation stands now and where it’s going next.

While U.S. investors are grappling with violent price swings as the coronavirus spreads, their Chinese counterparts at the heart of the outbreak are back to making decent money again.

China’s swift and strict measures to contain the virus, optimism over fiscal and monetary stimulus, and relatively reasonable valuations are among the key reasons for the recent relative rebound, according to market participants. Perhaps more importantly, China investors have already gone through the panic stage that their U.S. counterparts are experiencing now, they said.

A gauge of Chinese stocks in Shanghai and Shenzhen just posted its best week in a year — a 5% gain — after touching a two-year high on Thursday. Meanwhile, the S&P 500 Index has fallen almost 11% from its peak from last month, with volatility surging.

“It is interesting that China has started to outperform world equities since the start of February as confidence grows that it has passed the worst in terms of the virus, while concerns grow that the number of cases will surge elsewhere,” said Jefferies Financial Group Inc. strategist Christopher Wood, who recommended increasing China share weightings this week. “This market action also raises the hope, at least, that investors will look through the likely horrible first-quarter Chinese data.”

Here is a look at some of the drivers of the U.S.-China divergence:

With a string of drastic measures including putting entire cities under lockdown and controlling people’s movements, new infections have dropped significantly in China, yet are only beginning to climb in the U.S. As of Thursday, the number of coronavirus cases in the Seattle area jumped by 20, and 11 more New York state residents were confirmed to be infected.

“China has been able to contain cases, while the situation in the U.S is still unknown,” said Alex Wong, director of asset management at Ample Capital Ltd. “If they do the same procedures as in China, it will be a huge disaster to the economy, so people are trying to stay away from U.S. stocks.”

To Wong, U.S. stock investors are still in the early stages of reacting to the virus outbreak. They have just passed the period of across-the-board panic selling, and may soon focus on picking up stocks that are less impacted by the epidemic, as was the case in China and Hong Kong, he said in a telephone interview.

Wong has been buying shares in U.S. medical-equipment companies and video-game developers.

“We are in a different situation, people here have already been betting on stocks related to the ‘life-returns-to-normal’ theme, but they remain very uncertain about that in the U.S., and that’s why we are seeing this divergence,” he said.

To Andy Wong, a Hong Kong-based fund manager at LW Asset Management, China’s quick stimulus measures have fueled the outperformance of the nation’s equities, while the Federal Reserve’s emergency rate cut only reminded U.S. investors how much they had underestimated the scale of the problem.

A succession of policy-easing measures has ensured ample liquidity in China’s markets, with a measure of interbank borrowing costs tumbling to its lowest in almost a decade. Investors have also bet on infrastructure shares in the hope of further fiscal stimulus.

Valuation may also be part of the reason. The CSI 300 Index’s fell to a one-year low of 10.6 times profits projected for the next year in February, after the initial reaction to the outbreak virus hit China’s markets. Meanwhile, U.S. equity valuations dipped to about 16.6 times estimated earnings, according to data compiled by Bloomberg.

Still, some remain skeptical about the outperformance of Chinese equities. Hao Hong, chief strategist at Bocom International, sees China’s A shares eventually catching up on the downside to their U.S. peers.

“Logically speaking, how is it possible that the center of the epidemic got hurt less than somewhere else?,” Hong said. “The effectiveness of these stimulus measures is very limited at this moment — how could these infrastructure projects start when workers still haven’t returned to work?”