Investment legend Charlie Munger says the current climate global markets is crazier than the period of the dot-com bubble two decades ago, as he dismissed the surge in cryptocurrencies, saying he would never own one.

Mr Munger, the 97-year-old vice chairman of Warren Buffet’s Berkshire Hathaway, addressed the Sohn Hearts and Minds on Friday, highlighting the challenges of investing in a world of high valuations. 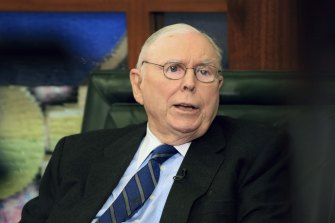 He said the current investment environment was “a little more extreme” than what he had seen in his decades of experience.

“I think the dot com boom was crazier in terms of valuations than even what we have now. But overall I consider this era even crazier than the dot-com era,” Mr Munger said.

In a wide-ranging discussion with Dr Mark Nelson of hedge fund Caledonia, Mr Munger said high level of stock prices made it much harder for investors to outperform the markets. He praised the traditional retail business CostCo, and was highly dismissive of the cryptocurrency craze, saying China was right to ban them.

“I think the Chinese made the correct decision, which is to simply ban them. My country has made the wrong decision.”

Mr Munger also said he remains a China fan although with the caveat that almost every capitalist is less enthusiastic about China than they were a year ago. But Munger was happy with China’s crackdown on what he labels exuberant capitalism.

“I think they were right to cut back on some of the exuberance that comes with capitalism.”

“They are acting in a more adult fashion than we are,” he said with reference to the US.

As for the volatile relationship between the two countries, Mr Munger said it would be insane for China and the US to not reach an “acceptable relationship.”