Facebook changes its company name to Meta amid controversies

On Saturday, mana, a gaming cryptocurrency used to buy and sell virtual land, surged to a record high of $4.16, more than 400% above where it was valued earlier in the week. It’s total market value reached a high of $7.52 billion. It has since fallen to about $2.99 per token as of Monday afternoon, with a total value of about $5.5 billion, according to CoinMarketCap.
The little-known crypto was established in 2017 as the national token for Decentraland, a virtual reality platform where users can buy and sell digital properties that they can navigate through and build on.

Investing in the metaverse

The spike in mana came just a few days after Facebook (FB) announced it is rebranding to Meta as part of its focus on developing the metaverse, a yet-to-be-fully-realized virtual reality ecosystem where users can interact with one another through avatars.

Metaverse is a blanket term for all kinds of virtual reality platforms and multi-player game worlds, such as Oculus VR headsets and Fortnight.
Facebook shifting its focus to the metaverse means “that there’s going to be a lot of development time probably spent from [Meta] building out some version of a metaverse where these tokens will find value,” Chris Kline, chief operating officer and co-founder of Bitcoin IRA, told CNN Business. “So you are seeing a rally of groups like mana.” 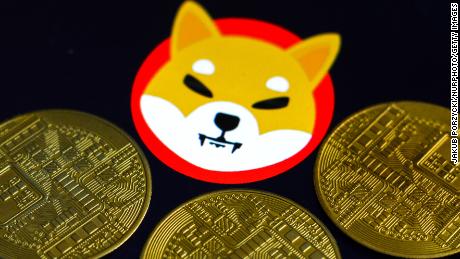 “This is great news for the crypto ecosystem because it’s mainstream understanding of another layer of ‘what is crypto,'” Kline added.
Bitcoin prices surged in October, hitting an all-time high of nearly $67,000, before sliding at the end of the month. Some investors then turned their attention to shiba inu, a parody crypto inspired by dogecoin, another meme cryptocurrency, hitting a record high valuation of about $26 billion.
The craze for lesser-known, alternative cryptocurrencies isn’t limited to just shiba inu, dogecoin and mana. There is no shortage of other cryptos that are zooming to new records.
Sand, the token for The Sandbox, another virtual world that allows users to create, buy and sell digital assets, also rose over the weekend, hitting $2.38, a nearly 200% increase. Sand’s total market value peaked at $2.13 billion on Saturday. It’s another sign that investors are interested in capitalizing on the metaverse economy.
“The Facebook announcement focused investors’ attention, in my opinion, on the economic potential here,” Noelle Acheson, head of market insights at Genesis Trading, told CNN Business.

The technological developments of the past few years, including a focus on the metaverse, combined with cultural shifts that were accelerated by the pandemic, have left investors eager to find the next bitcoin or ethereum, according to Acheson.
“Obviously nothing is going to replace bitcoin or ethereum per se, but those kind of returns [are what investors] are looking for,” Acheson said. “In other words, we know that bitcoin and ethereum have fantastic returns, so let’s move a little bit further down the risk curve, risk being a relative term here, and go for some of those higher volatility but higher potential tokens.”
Source: Read Full Article