The chairman of the $161 billion Future Fund, Peter Costello, says the money manager is preparing for a challenging and volatile environment, after its annual returns slipped to -0.9 per cent last year as a result of the pandemic.

The taxpayer-owned fund on Wednesday reported slightly negative returns for the year to June, due to an extremely volatile period on global sharemarkets in the second half of the financial year. 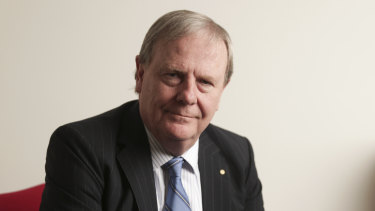 Future Fund chairman Peter Costello: “The factors that have fuelled strong performance in the past may not be there any longer.”Credit:Alex Ellinghausen

"The board is focused on positioning for what will be a challenging and volatile environment in the future," said Mr Costello, a former Liberal Treasurer and chairman of this masthead's owner, Nine Entertainment.

"The factors that have fuelled strong performance in the past may not be there any longer. We will need to be ever more strategic in how we pursue long-term returns in the future."

As the coronavirus pandemic forced a wave of shutdowns around the world, the Australian stockmarket plunged by more than a third in March. Mr Costello said the fund had performed as intended during period of volatility, while looking to benefit as markets recover.

"The second half of FY 2020 was dominated by the COVID-19 pandemic and the lockdown of much of the Australian economy by governments in response," Mr Costello said in a statement.

"The global economy went into reverse and the Australian economy moved into recession for the first time in 30 years. The downturn was fast and steep."

Over the last three years the fund's annual returns are 6.5 per cent, while since its inception in 2006 it has posted average returns of 7.5 per cent a year. The fund said it was very unlikely that its returns over the next 10 years would be as strong as those of the last decade.

Chief executive of the fund, Dr Raphael Arndt, said the fund was particularly conscious of its obligation to avoid "excessive risk," saying the changes in global markets were "momentous."

During the year, the fund said it reduced exposure to international private equity managers after a run of strong performance in this asset class, and pumped some of the capital made available into infrastructure investments.