A senior executive at the country’s largest business bank has called for governments to build more quarantine facilities and relax border closures to enable skilled migration to restart in order to provide a lifeline to businesses under pressure. 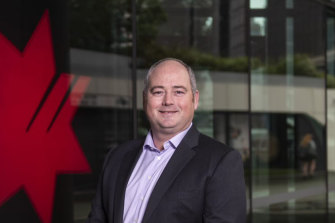 Mr Irvine said the “financial cliff” predicted once JobKeeper and bank loan deferral periods ended had not occurred, adding there had been strong growth across the economy particularly in health, manufacturing and construction. “I’m doing a little bit of work on my house having just bought in Melbourne and it is not easy finding tradespeople,” Mr Irvine said.

NAB’s total loan book is worth about $215 billion, with $2 billion being managed by the bank’s “financial difficulty” team. Mr Irvine said NAB had not yet had to close down any businesses due to loan defaults and he predicted this would be minimal.

However, he said some sectors of the economy were still struggling and these could receive a major boost to profits if the hard closure of Australia’s international borders was relaxed for certain types of immigration.

“I would like to see all levels of government working well together to safely get long-term migration going,” he said. “So we can bring them here and get them to work.”

He called for additional quarantine sites to be built, whether in Australia or abroad, to enable people who intended to remain in Australia for extended periods of time to enter the country.

“I’m not talking about your two-week holiday. What I am talking about is enabling skilled migration and international students to come back safely to Australia. We’re more optimistic that can happen in the medium-term than we would be around tourism,” Mr Irvine said.

The Victorian government last month called on Canberra to fund a $200 million quarantine site in the outer northern suburbs of Melbourne. Mr Irvine would not be drawn into the debate over who should fund the site but reiterated the need for more quarantine facilities. Australia has one quarantine facility in the Northern Territory which can house about 2000 people a fortnight.

Mr Irvine, who joined NAB last September coming from the Bank of Montreal, said allowing international students to return would have flow-on effects throughout the local economy, including city-based retail, hospitality and real estate businesses.

But he also said easing border closures would help regional communities after many farmers endured a critical labour shortage last year which had devastating impacts on their harvest. “Certainly access to migration on farms, that also would be really, really significant for our customers.”

A concise wrap of the day on the markets, breaking business news and expert opinion delivered to your inbox each afternoon. Sign up  Here.