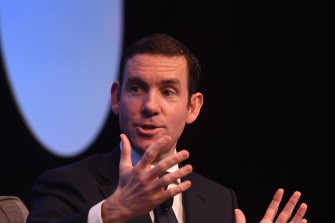 Greensill, founded in 2011 in Bundaberg by Lex Greensill, helped companies manage their finances by paying suppliers on their behalf and collecting the money later on.Credit:Peter Braig

Greensill, founded in 2011 in Bundaberg by Lex Greensill, helped companies manage their finances by paying suppliers on their behalf and collecting the money later on.

However, its business unravelled rapidly after Credit Suisse said it was winding down $US10 billion of funds mostly invested in notes backed by Greensill due to concerns about how some underlying assets were valued.

The administrators will first address which parts of the business can be sold on immediately.

Grant Thornton said the administrators were in “continued discussion with an interested party in relation to the purchase of certain Greensill Capital assets”.

Two sources familiar with the matter have said that Athene Holding, a partner company of US private equity giant Apollo Global Management, is in talks to buy some of Greensill’s business.

The collapse of Greensill, whose founder received a state honour from Britain in 2018 for his services to the economy, could lead to a series of regulatory investigations and cause financing problems for its higher-risk borrowers.

Greensill said it had provided more than $US143 billion of financing in 2019 to 10 million customers and suppliers.

In Germany, where Greensill runs a bank, financial regulator BaFin has filed a criminal complaint with prosecutors in Bremen, where the lender is based. The precise details of the complaint are not known.

BaFin also suspended Greensill Bank’s operations saying there was an imminent risk it could become bankrupt. The German bank kept Greenshill Capital’s short-term loans on its balance sheet before they were securitised and sold to Credit Suisse.

Several German municipalities have flagged that they have put millions of euros into Greensill Bank, attracted by its lack of negative interest rates, and some are calling on the federal government to cover any losses.

BaFin said an audit found that Greensill Bank could not provide evidence of receivables on its balance sheet purchased from mining tycoon Sanjeev Gupta’s GFG Alliance. GFG has not responded to requests for comment on BaFin’s findings.

The Bank of England’s Prudential Regulation Authority said it had ordered Wyelands to repay all its depositors, without specifying why. GFG has declined to comment on the matter.