London (CNN Business)Low inventory and surging demand have sent house prices soaring around the world, raising concerns about how long the red-hot market can be sustained.

What’s happening: The International Monetary Fund’s Global House Price Index, which tracks 57 countries, has surpassed its prior peak from 2008. According to Oxford Economics, house prices are growing at over 10% year-over-year in many major economies.
The frenzy is boosting stocks exposed to the sector. The iShares exchange-traded fund tracking residential real estate is up 23% in 2021, significantly outpacing the S&P 500.

AvalonBay Communities (AVB), which develops and manages apartments across the United States, has skyrocketed 31%. Invitation Homes (INVH), which owns and operates US single-family homes, has jumped 26%.

Stories of madness abound. Real estate agents have told CNN Business about increasingly rabid methods clients have deployed to secure properties — from bidding $1 million over the asking price to paying a competing bidder hundreds of thousands of dollars just to walk away.

One agent listed a home in Colorado Springs this week for $590,000 that she described as “every landlord’s nightmare.” It’s still expected to sell for more than $600,000, likely in cash.
Vacation homes are going quickly, too. Sales rose by a sharp 16% in 2020 from the year before, according to a report from the National Association of Realtors. And the trend has continued into this year, with sales already up 33% over last year through April.
This just in: Online real estate broker Redfin said houses were on the market in May for just 16 days on average, a record low. At the same time, 54% of houses sold above their listing price, an all-time high.
Intense bidding wars, supply shortages for materials like lumber and the prospect of higher interest rates are threatening to derail the market. Housing starts and building permits figures for May came in weaker than expected, according to a government report Wednesday.
And some are ringing alarm bells, even though analysts say the market is healthier than it was in the run-up to 2008 thanks to tighter lending standards.
Bloomberg Intelligence economist Niraj Shah wrote earlier this week that the market will “face a critical test” when borrowing costs start to rise. The Federal Reserve indicated on Wednesday that it could hike interest rates sooner than expected due to fears about inflation (which Oxford Economics notes have been made worse by the boom in housing prices).
But Lennar (LEN), a Miami-based home builder, says the good times aren’t over yet. The company said in its earnings report this week that its backlog and new orders for homes continue to look strong. Its stock jumped 3.6% Thursday on the news.

Wall Street is rushing to get workers back to the office

Wall Street is wasting no time getting its employees back into the office — whether they want to be there or not, my CNN Business colleague Matt Egan reports.
Morgan Stanley (MS) CEO James Gorman warned this week he’ll be “very disappointed” if workers aren’t back by Labor Day. And if they’re not? “Then we’ll have a different kind of conversation,” he said. 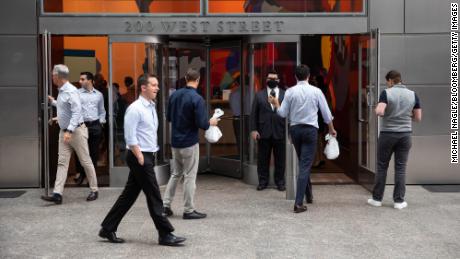 Goldman Sachs (GS) asked its employees to be back at the office by this week and ordered staffers to divulge whether they’ve been vaccinated. Bank of America (BAC) also wants employees in their seats by Labor Day.
Big picture: Even more than other industries, Wall Street is in a rush to turn the page on this extended era of virtual work.
One factor is cultural concerns, as executives note that Zoom calls and Slack messages are no substitute for in-person bonding and training. Others worry about the cybersecurity and risk management vulnerabilities inherent to businesses that conduct billions of dollars of transactions virtually every day.
Plus, at its core, banking is a face-to-face business — and no one on hyper-competitive Wall Street wants to lose a deal because of a slow WiFi connection.
“You’re creating your own unlevel playing field if you are working from home while your competition is out seeing clients face-to-face,” said Mike Mayo, a veteran banking analyst at Wells Fargo. “The banking industry certainly seems intent on getting employees back to the office. But it’s much more pronounced on Wall Street, where the degree of competition has always been several levels above the rest.”

On Thursday, President Joe Biden signed a law establishing June 19 as Juneteenth National Independence Day — a US federal holiday commemorating the end of slavery in the United States.
Now, markets and regulators are scrambling to figure out how they’ll incorporate the day into their calendars.
SIFMA, the lobby group for the US securities industry, tweeted Thursday that it wouldn’t recommend a market holiday this year, since Juneteenth falls on a Saturday. But going forward, the organization said it would incorporate it into its recommended holiday schedule for bond markets.
The Federal Reserve said in a statement that it would close its Washington, D.C. office on Friday.
Watch this space: Bloomberg notes that US markets can be slow to catch up with Congress. Martin Luther King Jr.’s birthday became a federal holiday in 1983, but it took 15 years for major exchanges to decide to close for the day.
Businesses — which started rallying around Juneteenth after George Floyd’s murder by a former police officer last year — are taking a range of approaches to celebrating the holiday, which marks the day in 1865 when former American slaves in Galveston, Texas, were finally informed of President Abraham Lincoln’s Emancipation Proclamation and the end of the Civil War, my CNN Business colleague Chauncey Alcorn reports.
Amazon is sponsoring several Juneteenth events this weekend. Apple is giving US corporate employees the day off on Friday. Starbucks is paying hourly employees 1.5 times their regular wages on Saturday, while Chipotle is giving customers an opportunity to help close the racial wealth gap by donating to Project 10X, an initiative that promotes racial equity.

Coming next week: Amazon (AMZN) holds its annual Prime Day sale, which is estimated to have brought in more than $10 billion last year. But the event could also be a lightning rod for criticism of the company’s treatment of workers.
Source: Read Full Article