ME Bank closing in on deal with Bank of Queensland, shareholders told

Bank of Queensland is closing in on a deal to fully acquire the industry superannuation fund-owned ME Bank, after months of speculation around whether the boutique lender was for sale.

The Age and The Sydney Morning Herald can reveal ME Bank’s significant super fund shareholders were sent an email last week saying a deal with BoQ was on the table and close to being finalised. The bank’s smaller fund shareholders have also been asked to sell their shares and forced to sign non-disclosure agreements.

The push to sell ME Bank has been brewing for years, as the lender had never paid its shareholders a dividend and failed to achieve the scale needed to compete with its commercial rivals. 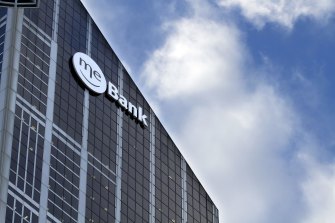 ME Bank has informed shareholders its close to finalising a takeover deal with Bank of Queensland. Credit:Luis Enrique Ascui

Sources said while deal talks were at an advanced stage there is no guarantee it will be completed. ANZ Banking Group has also been linked in media reports with a bid for the company.

“It’s not 100 per cent a done deal. These things take time of course,” said one source briefed on the situation who could not speak publicly because the talks are confidential. “Banks are somewhat more complicated than normal proprietary limited companies. But it’s pretty much, it’s very close to a done deal.”

Another source from a smaller fund, who could not be identified because they had signed a confidentiality agreement, said they had been asked to sell their shares to BoQ. “It wasn’t our initiative,” the source said. “It’s the board that has made a decision about the future. It’s pretty hard to be competitive with the big banks.”

A third source who could not be named because they are not authorised to speak publicly, said there was disagreement between the bank’s shareholders around whether to sell the asset, with smaller funds wanting to retain it and larger funds pushing to divest.

“The split was between larger and smaller,” the source said. “AusSuper has always been a bit determinative where they go and they’re the ones giving the nudge.”

“The smaller funds have been keen to hold onto it, maybe because of the history.”

“I’m actually quite angry about it,” one of the sources said. “Some of these people don’t seem to share the vision I suppose of actually building collective financial institutions.”

“The difficulty here is if you don’t get scale, you can’t pay for the online platform that you need to have a consumer interface you’re happy with.”

Super fund giant AustralianSuper has been leading the push to divest ME Bank in part due to concerns the boutique lender had become more hassle than it is worth. “The amount of scrutiny this asset has got and the amount of money spent on reviews and legal advice is just insane.”

Industry Super Australia chair Greg Combet has been working as an adviser to ME Bank’s board, closely monitoring negotiations with chair Jim Evans. He could not comment on the deal due to confidentiality agreements that had been signed.

ME Bank appointed Adam Crane as chief executive in August last year, taking over from Jamie McPhee who had been in the role for more than a decade.

The executive shake-up came after The Age and Sydney Morning Herald revealed changes to the bank’s mortgage redraw policy had left thousands of customers without access to cash amid the height of the pandemic.

The reporting ultimately forced a reversal of that policy, but many customers told this masthead they had lost faith in the bank’s management.

BoQ, ME Bank, AustralianSuper and ANZ declined to comment.