National Australia Bank's head of business banking, Anthony Healy, is the second senior executive this month to announce he will be leaving the lending giant, which must now fill two critical senior management vacancies.

Mr Healy, chief customer officer of business and private banking, who had previously been mooted as a potential next CEO of the bank before it opted for Ross McEwan, on Monday said now was the "right time" for him to depart the bank. It comes after another senior executive, former NSW Premier Mike Baird, also announced he would be stepping down from his job running the consumer banking arm of NAB. 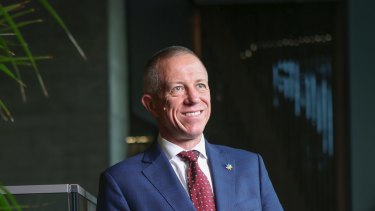 Anthony Healy, chief customer officer of NAB’s business and private bank, will leave at the end of April. Credit:Wayne Taylor

The departures mean Mr McEwan, appointed last year, will now need to appoint senior executives to run the bank's business division, seen by investors as the "crown jewel" of NAB, and its consumer banking arm.

Mr Healy, who before running the business bank was in charge of NAB's New Zealand business, signalled it was the right time for a new phase in his career.

“I am confident that under Ross’ leadership, NAB will continue to thrive in a challenging banking
environment. Now is the right time for me to consider what the next 10 years look like,
professionally and personally,” Mr Healy said in a statement.

Mr McEwan said Mr Healy, who is leaving NAB at the end of April, had led NAB's business bank at a critical time, and he had championed support for small and medium enterprises.

“He has been a key member of NAB’s executive leadership team through a challenging period and
I have valued his support since I joined NAB. I wish him well for the future,” Mr McEwan.

Last September, Mr Healy had said he was "very committed" to NAB and said he hoped to remain at the lender, while acknowledging he served at the pleasure of the CEO and the board.