AMP’s first female chief executive will be paid a smaller fixed salary than her predecessor but corporate governance experts claim this is due to the reduced size of the company, not the gender of the boss.

AMP announced last Thursday that chief executive Francesco De Ferrari would “resign” from the role in the coming months and be replaced by ANZ deputy chief executive Alexis George.

Her sign-on package includes a base salary of $1.7 million, which is a pay rise from ANZ where she earned $1.1 million per year, but is $500,000 less than what Mr De Ferrari was offered when he joined the company in 2018. 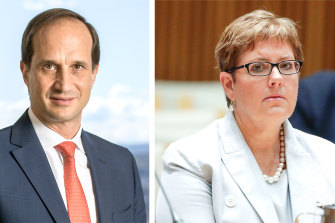 AMP’s new CEO Alexis George’s base pay is less than her predecessor, but industry experts suggest its still above average. Credit:

ISS head of research Vas Kolesnikoff said the disparity has nothing to do with gender as Ms George would inherit a smaller company with a domestic focus and had no prior experience as a chief executive.

“I don’t want to be a male going out there and saying this is right. But pretty much every new CEO we see coming into a role, who certainly hasn’t been a CEO before, comes in at a lower package. It’s as simple as that.”

Former Chief Executive Women president Sue Morphet agreed, claiming it was common for new CEOs to be paid less than their predecessors and the smaller base rate was likely due to AMP’s changed business model.

“Sometimes companies are made smaller, therefore you have to assess the salary according to the needs and demands of the job. On the outside, it might look like it’s being paid less but the company might be smaller,” Ms Morphet said. “Or it could be, you know the person who was paid before was paid far too much, we’re embarrassed by it, we need to reset the dial.”

Ms Morphet said any gender discrimination would be evident in the future pay rises given to the company’s first female CEO.

Mr Kolesnikoff said Mr De Ferrari’s pay packet was designed to lure the experienced investment banker from Credit Suisse, where he had worked in various executive roles in Asia and Europe since 2002.

“His pay was way over the odds for that type of market cap business. It’s probably the right size now which is the right thing to do,” Mr Kolesnikoff said.

Mr Kolesnikoff said Ms George’s sign-on salary is “more than generous”, pointing to a report from last year that found the average CEO salary for companies similar to AMP was around $1.5 million.

“The way it works in this market, you bring in a new CEO, essentially an unproven CEO, [she] starts off at a lower package and then builds the business, builds a track record, builds success, and then it slowly starts coming up.”

Under Mr De Ferrari, AMP sold its life insurance business and launched a review to sell other parts of the company. The board remains in negotiation with US investment firm Ares to split up and spin off parts of AMP Capital, meaning AMP will now focus on domestic banking and wealth management rather than global investments.

Ms George could earn around $6.8 million in bonuses during her first year if she passes a number of performance hurdles, with half of these tied to AMP’s Total Shareholder Return – a combination of capital gains and dividend payments – increasing by at least 8.5 per cent annually.

AMP’s share price is hovering around $1.32 per share, four times lower than its value five years ago. The company has been hit with successive scandals, including systemic misconduct aired during the banking royal commission and an investor revolt last year over a botched handling of a sexual harassment complaint.

Mr Kolesnikoff said AMP’s share price had hit rock bottom so Ms George was “starting off a low base” in the quest to build shareholder value. “It doesn’t seem overly challenging. But that’s AMP for you.”

Mr Kolesnikoff said the leadership shake-up might represent the circuit breaker needed to advance the company’s simplification strategy but would not be a silver bullet solution.

“Just changing the CEO in this case isn’t going to be the answer. It won’t just suddenly create shareholder value. It’s got to come down to the operations, and getting the bank, getting the super, getting the distribution to create value.”