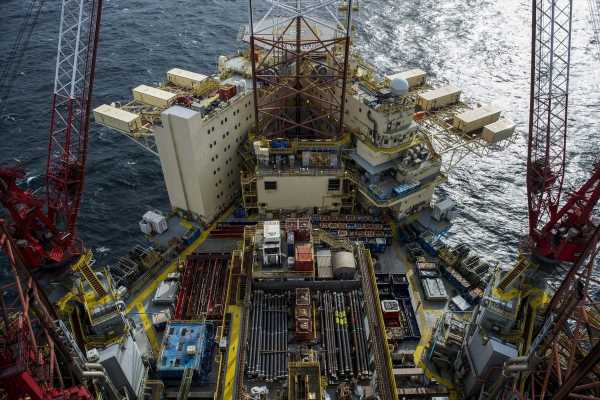 Want the lowdown on European markets? In your inbox before the open, every day. Sign up here.

Norway now risks sinking into its first recession since the financial crisis of 2008 after a collapse in oil prices changed everything for western Europe’s biggest petroleum producer.

Handelsbanken is telling its clients that Norway’s mainland economy will probably start shrinking next quarter. The richest Nordic nation depends on oil and gas for more than a third of its exports, and economists have responded to the latest sell-off by warning that Norges Bank will need to cut interest rates next week, potentially by as much as half a point from 1.5%.

For Norway, the pain of an oil market slump comes on top of the threat of the coronavirus to its export-reliant economy. On Monday, investors responded by dumping the Norwegian krone, sending it down about 5% against the euro into uncharted territory.

In a report on Tuesday, Norges Bank warned that the businesses it surveyed see the virus outbreak hurting their outlook. But the report fails to capture the effect of lower oil prices, leaving investors fearing a much worse outlook once fresh data comes in.

“Adding to the negative effects of the sharp drop in oil prices, not reflected in the survey, we believe the mainland economy will enter a recession in Q2,” economist Marius Gonsholt Hov said in a note to clients.

Norges Bank’s so-called regional survey output index for the next six months fell to 0.83 from 0.96 in the fourth quarter, already indicating slowing growth. But the “information value is limited,” since that index captured neither the escalation in the virus outbreak or the oil-price collapse, Danske Bank Chief Economist Frank Jullum said.

Handelsbanken, Danske, Nordea and other Nordic banks now expect Norway’s central bank to cut its benchmark rate by at least 25 basis points at its next meeting March 19.