Global insurer QBE will not pay a final dividend after reporting a yearly loss of $US1.5 billion ($1.93 billion) caused by reduced investment income, ongoing uncertainty around exposure to COVID-19 business interruption claims and more natural disasters.

QBE’s result is a major swing from last year’s $US550 million profit and final dividend of 27 cents per share, which was up 4 per cent on the prior year.

QBE’s combined operating ratio – the difference between premiums received and claims paid – was 104.2 per cent, compared with 97.5 per cent last year. A ratio of more than 100 per cent constitutes an underwriting loss. 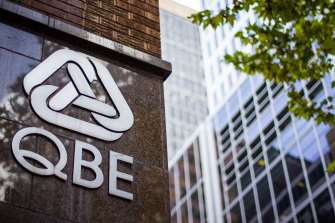 The global insurer was hit by ongoing uncertainty around exposure to COVID-19 business interruption claims and more natural disasters.Credit:Bloomberg

This was partly caused by the group’s catastrophe claims for the year, which cost $US668 million or 5.8 per cent of net earned premium, up from $US426 million in the prior year and $US134 million above its allowance. The bulk of these claims were related to last summer’s Australian bushfires and east coast hail as well as US fires and Atlantic hurricanes.

QBE also expanded its provision for COVID-19 losses by $US185 million in January after losing another defeat in the UK courts over whether insurers are liable to pay out business interruption claims to policyholders impacted by COVID-19 lockdowns. The insurer is bracing for at least $US785 million in claims, but said the exposure in Australia remains uncertain, pending further legal action.

QBE’s net investment return was 0.9 per cent for the year, with closing funds under management sitting at $US27.7 billion, compared to 3.9 per cent growth from last year.

QBE’s board has elected not to pay a final dividend “in light of the substantial 2020 statutory loss”, adding an interim dividend would be paid if economic conditions did not deteriorate materially.

In some good news for the business, QBE reported its premium renewal rate increased to 9.8 per cent compared with 6.3 per cent the previous year and gross written premiums grew by 10 per cent to $14.6 billion.

Chief executive Richard Pryce said he was “obviously very disappointed” with the headline loss, but pointed to the premium growth.

“I look forward to leading the business in 2021,” he said. “My primary focus remains performance improvement including that the Group takes full advantage of currently favourable market conditions by maximising premium rate increases while driving targeted growth in portfolios and regions offering the most profitable new business opportunities.”