Market Forces, which is part of Friends of the Earth, on Thursday said it had lodged resolutions with the three big banks after it made a similar push with the Commonwealth Bank in August. 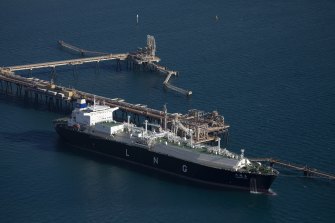 Environmental groups are pressuring banks to cut their exposure to the oil and gas sector.Credit:

Market Forces accused the banks of undermining their own public commitments to support climate change action by lending to companies that are expanding the fossil fuels industry.

The group said the resolutions called on the banks to stop funding new fossil fuel projects and to cut their exposure to the coal, oil and gas sectors “consistent with the global goal of net-zero emissions by 2050”.

The proposed resolutions for the three bank’s annual general meetings, to be held in December, come as financial institutions, including NAB, are reviewing their policies on oil and gas exposure. Most lenders have slashed thermal coal lending in recent years.

Global investors are putting a growing focus on climate risks in the financial system, and the issue is also receiving more attention in the lead-up to the Glasgow summit on climate change next month.

Market Forces Australian campaigns coordinator Jack Bertolus said the “continued large-scale lending to fossil fuels is not only exposing these banks and their shareholders to increasing levels of climate risk, it’s also undermining our chances of getting the climate crisis under control”.

An ANZ spokesman said the bank had cut its exposure to thermal coal by about 70 per cent since 2015, while its oil and gas exposure had remained relatively flat. The bank planned to release new climate targets in the coming month, he said.

A Westpac spokesman pointed to the bank’s climate policies, which include not establishing new relationships with new thermal coal mining, and an expectation that any new oil and gas customers have publicly disclosed business goals that align with the 2015 Paris Agreement on climate change action.

NAB chief executive Ross McEwan said in September the bank would review its policy on oil and gas exposure over the next six to 12 months. In considering its policy on oil and gas lending, NAB would need to look at how any changes would affect parts of Australia, as well as the country’s energy needs, Mr McEwan said. A spokeswoman confirmed the bank had received the Market Forces resolutions.

In previous years, banks have resisted similar resolutions, which have not received majority shareholder support. However, investor support has been growing for stronger action in recent years, as regulators also scrutinise how banks plan to deal with climate change risks.

The Commonwealth Bank will also put a Market Forces resolution to shareholders next week. CBA is recommending shareholders vote against the resolution, a position shared by major proxy advisers.