Today will either mark the start of Westpac’s comeback or the day it will rue by setting itself an ambitious cost reduction target against which it will be judged for three years.

Westpac’s 60 per cent increase in half-year cash profit, excluding one-offs, announced on Monday, reflects some wind back from last year’s big provisions and the generally better experience around bad debts. This is a feature investors will see over the next week as ANZ and the National Australia Bank report their half-year results.

Westpac’s result has provided the market with a glimpse of how banks are looking in the post COVID world. Given Australia’s big four banks are almost entirely domestically focused, the long tail of the pandemic ravages being experienced in other countries is not having any real impact on their business. 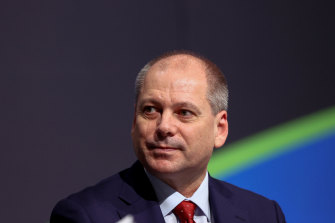 The centrepiece of Westpac chief executive Peter King’s recovery plan is a $2b cost-cutting drive.Credit:Dominic Lorrimer

Our banks are far more sensitive to Australia’s economic growth and employment.

Australia’s outperformance in its handling of the pandemic and its outsized economic growth has meant the dire predictions banks made a year ago about bad debts didn’t come to pass. The share prices of each of the four majors have largely recovered to pre-pandemic levels.

Having said that Westpac has underperformed its major competitors at an operational level – which can be viewed in two ways. Among its peers it is the bank with the potential to improve, so the fans will treat the stock as a recovery story.

Westpac bears will be wary of its ability to grow its market share sufficiently to regain ground lost to the others and in particular the clear leader, CBA.

Chief executive Peter King couldn’t afford to be underconfident on Monday when he outlined the green shoots the bank had experienced over the past couple of months and his hope it will catch up to the others in terms of mortgage growth in the six months to September 2021.

He said the recent improvements in mortgage growth had come off the back of the work done last year, and applications for mortgages were stronger.

But the central plank to King’s recovery plan will a $2 billion cost-cutting exercise.

Most bank investors suffer from “cost out” fatigue having heard the major banks’ talk about big plans to take expenses out of their businesses for years. Westpac’s plan, which is all about its simplicity mantra, has caught investor attention because it has been broadly quantified.

The danger in being this explicit is that failing to meet the target will be punishable. King has given himself three years to get there, but he will need to provide updates along the way.

Having said that King will be assisted by some tailwinds. The first is that a decent portion of the cost reduction will come from exiting non-core businesses. And some of the savings will be the result of cutting staff and branch numbers – over which Westpac will have control.

But King artfully dodged questions on how many (both staff and branches) they were looking to cut. Customers and unions are generally negative about staff cuts and branch closures and King clearly wants to avoid those unpleasant headlines.

(That said, they will be music to the ears of other bank bosses who are desperate to undertake a more meaningful post-COVID branch cull.)

But there are plenty of risks associated with cost-cutting – the most significant of which is destabilisation of the business and alienating customers, which can negatively affect revenue.

Another issue is that Westpac will need to spend money to save money. The spending comes first.

The third is medium-term creep – where costs are cut within the prescribed period but they build up again in ensuing years.

But these questions will not be answered soon.

The market responded positively to the release of Westpac’s profit numbers, which were better than analysts were expecting with the bank experiencing an unexpectedly strong improvement in net interest margins and better fee income.

The bank’s share price rose about 5 per cent, shrugging off the news that the new normal in its dividend payout ratio will be 60 to 65 per cent which is well down on the pre-COVID level of 83 per cent.