Americans Just Got A Glimpse Of Presidential Crisis Management

America finally got to see what presidential leadership on the coronavirus outbreak looks like. But it didn’t come from the president.

At Sunday night’s CNN/Univision debate, the two front-runners for the Democratic presidential nomination, former Vice President Joe Biden and Sen. Bernie Sanders (I-Vt.), got a chance to talk about the pandemic that has already killed several dozen Americans and could kill hundreds of thousands, maybe even more, before it has run its course.

They took slightly different tacks ― consistent with their different philosophies and approaches to the presidency ― and largely reiterated the points they each made Thursday during speeches addressing the crisis.

But Biden and Sanders also agreed on a lot. And in sketching out their responses to the crisis, they managed to do what President Donald Trump has very conspicuously not yet done: They showed they understood the immediate challenges facing the U.S. and had a sense of how to overcome them.

Biden went first, identifying three critical needs: rapidly expanding testing, increasing the capacity of the health care system to deal with the coming surge of patients, and addressing the economic downturn sure to happen as nearly all activity in the U.S. grounds to a halt.

Sanders also honed in on three urgent tasks. Like Biden, he identified the need to ramp up health care system capacity and to save the economy. But where Biden had talked about testing, Sanders talked about making sure people didn’t have to worry about paying for any medical treatment related to the pandemic.

It made sense that Sanders would talk about health care, because “Medicare for All” has been such a signature cause for him. He has said repeatedly that the coronavirus exposes the flaws in the U.S. health care system: It’s making clear how the lack of affordable health care makes it hard for people to get tests or treatment when they need it ― which, in the case of a pandemic, puts everybody at risk.

“If this isn’t a red flag for the current dysfunctional and wasteful health care system, frankly I don’t know what is,” Sanders said in his Thursday speech. “We are only as safe as the least insured person in America.” 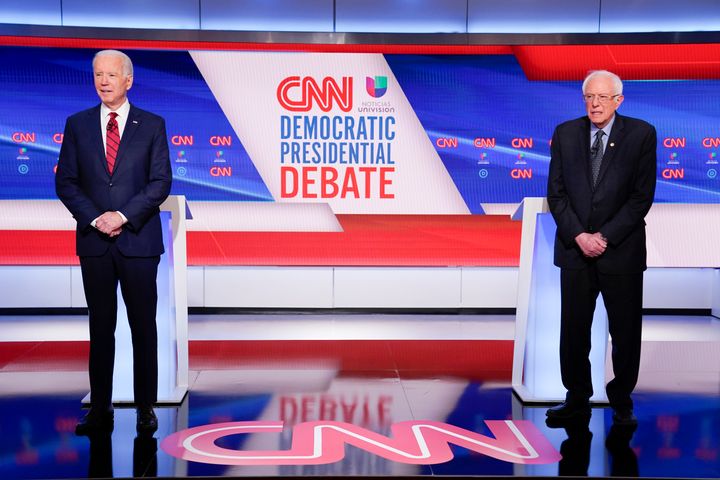 As usual, Medicare for All became a source of conflict between the two candidates at the debate. Early on, Biden, who does not support the policy, took a jab at Sanders by saying Italy’s struggles with coronavirus prove such a system “doesn’t work.”

That’s not really a defensible claim. Italy’s health system is overrun because the pandemic got so out of control, by all accounts, not because of the system’s design. South Korea has a single-payer system, though not identical to what Sanders has in mind, and has won international praise for its reaction to the pandemic.

But Biden followed up quickly with what sounded like a clarification ― that Medicare for All, per se, wasn’t an answer to coronavirus. “That would not solve the problem at all,” Biden said. He went on to explain that the crisis called for an immediate response, like the one he outlined in his Thursday speech.

It was not an empty boast. The plan Biden released on Thursday didn’t merely propose to increase the health system’s capacity. It offered concrete ideas for how to accomplish that ― like deploying mobile medical units from an emergency federal stockpile, setting up real-time dashboards to track patient admissions and the availability of key supplies, and creating a national telephone hotline available to all Americans with questions.

The plan closely aligned with what public health experts have been recommending and even included a few ideas (like the mobile medical clinics) that haven’t gotten much attention. That’s not surprising, because managing an interagency response to a crisis is something Biden has done before, and done well ― specifically, with implementation of the 2009 American Recovery and Reinvestment Act, which was the emergency legislation designed to stop the economy from falling apart and, then, to get it moving again.

Democratic voters will have to decide which approach makes sense, and which candidate they trust more. But the contrast between the two of them on the one hand, and Trump on the other, could not be more stark.

Trump made two major public appearances this week: an Oval Office speech and an event with CEOs in the Rose Garden. In each case, despite reading from prepared text, the president managed to make inaccurate statements ― like claiming that Google was about to set up an interactive testing site ― that the White House had to correct later.

During these appearances, Trump also modeled exactly the kind of behavior that public health experts have been begging Americans to avoid: hand-shaking and standing in close proximity to other people.

Meanwhile, testing in the U.S. continues to lag behind other countries, with widespread stories of people who likely need but cannot get tests ― even though Trump keeps boasting that they are available everywhere.

And while pretty much everybody watching the news now understands that the limited hospital capacity is about to become a crisis, Trump said nothing about it in his speeches. His administration’s officials also have provided no answers when asked, in public or private, what they intend to do about it.

Sanders or Biden may not have all the solutions. But on Sunday night, they at least showed that they understood what the problems are.