Real estate entrepreneur and regional media owner Antony Catalano has increased his stake in Prime Media Group for the second time in six months, pushing himself over the 20 per cent takeover threshold.

Industry sources familiar with the transaction, who spoke on the condition of anonymity, said Mr Catalano now holds a 22.9 per cent stake in the regional TV broadcaster, having bought more shares with his rich list business partner Alex Waislitz from WIN Corp billionaire Bruce Gordon.

Mr Catalano and Mr Waislitz are easily the largest shareholders in the company, which tried to merge with Seven West Media in 2019. The increase in ownership is a clear signal the pair still want to take over the company, the sources said. 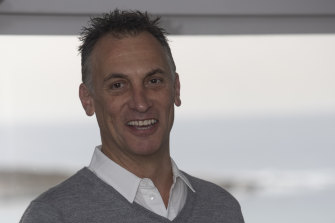 Mr Catalano was on his morning walk in NSW’s Byron Bay and said he was unavailable for comment. The increase comes six months after Mr Catalano and Mr Waislitz increased their exposure in Prime from 14.57 per cent to 19.99 per cent. That trade was subject to a review by the media regulator, the Australian Communications and Media Authority.

While the pair – through their investment vehicle WA Chess Investments – now meet the 20 per cent takeover threshold, they will not be obliged to make a bid for the entire company. The two executives acquired the 3 per cent parcel six months after their most recent previous purchase, which means they are exempt from having to lodge a takeover bid for the company under creep provisions in the takeover law.

But Mr Catalano and Mr Waislitz, who own a number of regional newspapers including The Newcastle Herald and The Canberra Times through Australian Community Media, now have more influence in determining the future of Prime. They also carry more weight should Seven propose another takeover bid. Industry sources familiar with their plans, who spoke anonymously, said another request for board representation is inevitable.

Mr Stokes, who is the chairman of Seven West Media, has previously used creep provisions to take control of a company. He slowly increased his stake in West Australian Newspapers, and implemented the same strategy to take control of Beach Energy, which is owned by Seven Group Holdings (the majority shareholder of Seven).

Mr Waislitz and Mr Catalano first established a 14.6 per cent stake in Prime in late 2019 in an attempt to block a $60 million merger between the regional broadcaster and Seven. Prime has an affiliate deal with Seven, allowing it to broadcast Seven hit shows such as The Voice and Holey Moley in regional markets.

The metropolitan TV broadcaster bought 14.9 per cent of Prime after its acquisition attempt failed. At its financial results this year, Seven boss James Warburton said he had options – signalling the network could always try to tie up with Prime’s rival, Southern Cross Media Group.

“It makes sense to become a national television network,” Mr Warburton said. “We’ve got options in terms of what we could do from a regional perspective, and we plan to execute that.

Prime plans to pay its first dividend to shareholders since 2017 later this month after revealing a significant increase in its net profit. Earnings before interest, tax, depreciation and amortisation soared 81.6 percent to $36.8 million for the 2021 financial year, while net profit was $19.6 million. Total revenue grew 9.2 per cent to $178.7 million. The group’s debt facility with its banks remains undrawn.

Mr Catalano has made no secret of his interest in acquiring Prime Media Group and diversifying the company. The former Domain boss sold most of his print sites last year to free up cash and shift the focus to growth through capital-light media assets.

Prime closed at 24 cents per share on Tuesday, up 2 per cent.