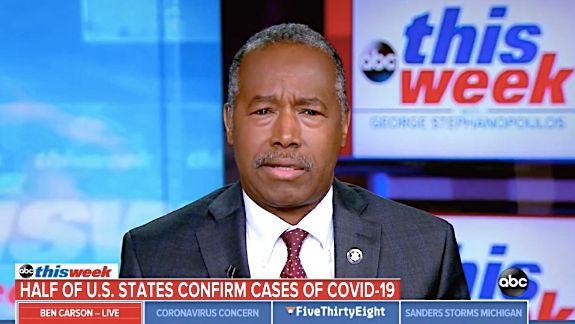 Federal coronavirus task force member Ben Carson on Sunday refused to disclose any details of the Monday docking in California of the Grand Princess cruise ship carrying people with the illness, saying the plan is still being “formulated.”

Health authorities revealed that 21 people of just 46 who have been tested on the ship have been infected with the new coronavirus. There are around 3,500 people on board. A former passenger on the ship became California’s first person to die from COVID-19.

George Stephanopoulos on ABC’s “This Week” pressed the Housing secretary about what will happen when the ship is finally allowed to dock in Oakland. Any details could reassure Californians fearful of being exposed to the disease.

“What plan is in place?” he asked. Carson responded: “They are coming up with a plan.” (Check out the video above.)

When Stephanopoulos reminded Carson that the docking was happening the following day, Carson assured him: “The plan will be in place by that time. But I don’t want to preview the plan right now.”

“Shouldn’t you be able to do that?” asked Stephanopoulus. Carson reemphasized: “It hasn’t been fully formulated..”

But while Carson refused to discuss the docking, California’s Gov. Gavin Newsom discussed details of what will happen.

He said Sunday that disembarkation could take up to three days and passengers will be processed in an 11-acre fenced off-site at the Port of Oakland. People with symptoms will receive treatment first. The others will be quarantined for 14 days. Close to 1,000 Californians on board will be transported to Travis Air Force Base in the San Francisco Bay Area. Other passengers from some 54 nations will be taken to different military bases, including in Texas, said Newsom.

Georgia Gov. Brian Kemp issued a statement late Saturday that 34 Georgians and other Americans passengers from the East Coast would be “securely” transported to Dobbs Air Reserve Base in Marietta.

The Carson docking exchange was only one of the surprises in his otherwise somnambulant interview. Asked about the wisdom of President Donald Trump vowing to continue campaign rallies during nationwide concern about the coronavirus, Carson said “there’s no reason” a “healthy individual” shouldn’t attend. “Go about your normal daily activities if you are healthy,” said Carson.

When Stephanopoulus pressed him for advice to Americans to protect themselves from the virus, Carson said: “Those recommendations will be coming out” from the Centers for Disease Control and Prevention. The CDC has already posted recommendations, including travel warnings and precautions for mass gatherings. Organizers of several mass gatherings have already canceled them.

“I’m confused by the message you’re sending right now, Dr. Carson, I have to say,” said Stephanopoulos. Check out the video of that exchange here:

The Grand Princess has been circling off the coast of California awaiting permission to dock since Newsom demanded protocols for passengers before the ship would be allowed to discharge them.

Over 100,000 people worldwide have been infected with COVID-19, the disease caused by the coronavirus. In the U.S., the coronavirus has killed at least 18 people and infected over 350.

For a contrast, check out Newsom’s comments here: