BHP, the world’s top mining company, is accelerating its retreat from fossil fuels with a deal to sell its global oil and gas assets to Australian energy giant Woodside Petroleum. 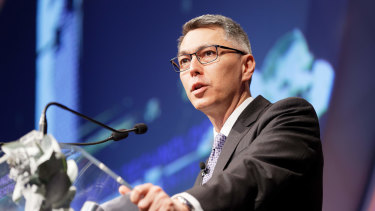 If BHP chooses to sell its petroleum business, it would also mark a major acceleration of chief executive Mike Henry’s retreat from planet-heating fossil fuelsCredit:Trevor Collens

“Bringing the BHP and Woodside assets together will provide choice for BHP shareholders, unlock synergies in how these assets are managed and allow capital to be deployed to the highest quality opportunities,” Mr Henry said.

Selling out of oil and gas marks the most significant shake-up of BHP’s portfolio in several years and an acceleration of chief executive Mike Henry’s plans to decarbonise its operations.

Petroleum has been an important part of BHP since the 1960s, when the company found Australia’s first major offshore oil and gas field in the Bass Strait, between Victoria and Tasmania.

However, amid intensifying scrutiny from investors and wider society over climate change in recent years, resources companies around the world have been forced to rethink their exposure to planet-heating fossil fuels.

Melbourne-based BHP, which derives the bulk of its earnings from iron ore and copper, has been pursuing a plan that includes exiting thermal coal mining and boosting its exposure to “future-facing” commodities of copper and nickel that will be increasingly needed to manufacture electric batteries.

“Petroleum simply no longer fits within BHP’s portfolio or future-facing strategy,” said Credit Suisse analyst Saul Kavonic, who has long-considered Woodside to be the division’s most likely buyer.

“After having waited too long to divest thermal coal, and now having to resort to selling for cents on the dollar, BHP should know it’s better to exit petroleum sooner rather than later.”

For Woodside, acquiring BHP’s petroleum assets would firm the company’s position as Australia’s largest independent oil and gas producer after two of its ASX-listed rivals – Santos and Oil Search – agreed to a $22 billion merger earlier this month.

BHP and Woodside are already partners in two Western Australian projects: the North West Shelf joint venture and the $16 billion Scarborough liquefied natural gas (LNG) project which they hope to green-light this year.

BHP also owns a 50 per cent interest in the ExxonMobil-operated Bass Strait oil and gas fields off Victoria, and oil and gas interests in the Gulf of Mexico, Trinidad and Tobago and Algeria.

However, the proposed Woodside-BHP deal is likely to face high hurdles after one of Woodside’s largest shareholders voiced concerns about the proposed transaction when news of the negotiations surfaced earlier this week.

“There are a few issues, all of which culminate in our view that this is crazy from the perspective of Woodside shareholders,” Allan Gray chief investment officer Simon Mawhinney said.

For one, Mr Mawhinney said, BHP’s oil and gas assets were mature, declining and faced imminent and onerous rehabilitation liabilities. The division was also predominantly made up of oil, a fuel considered to be at greater risk from the clean energy shift, he said. Woodside’s top commodity LNG, on the other hand, may have a comparatively brighter outlook because of its potential role as a “transition fuel” supporting greater uptake of renewable energy as countries wean off coal-fired electricity.

UBS analyst Tom Allen said the merger proposal carried “considerable risk” of obtaining shareholder approval given the board was driving the deal without having a permanent CEO in place.

Credit Suisse, while recognising a risk Woodside could be seen as overpaying for the assets, also pointed to potential benefits of the deal for the company’s balance sheet and its prospects of sanctioning the Scarborough gas project. “Overall, we expect the upside should more than outweigh the downside and see the merger as likely to be materially positive for Woodside,” Mr Kavonic said.

The deal signifies a major strategic turnaround for BHP, which as recently as last year insisted it intended retain and potentially expand its oil and gas interests to meet the world’s ongoing energy needs.

While oil and gas demand is forecast to remain strong for many years, the industry has been facing escalating pressure from investors over its contribution global warming and the risk of demand falling faster and steeper in the future than previously expected as decarbonisation efforts pick up pace.

In May, the International Energy Agency released a landmark report warning investors must avoid funding any new oil and gas fields if the world is to achieve the international Paris Agreement’s aspirational goal of limiting global temperature rises to 1.5 degrees.