Energy groups in Alaska and beyond blasted the Biden administration for suspending long-sought oil and gas leases in the Arctic National Wildlife Refuge (ANWR) this week pending review.

“More than anything, Alaska has a lot of potential new discoveries. There’s evidence we’re going to need these energy sources to meet global demand. … Anytime you create this uncertainty or delay, you potentially risk future investment,” Patrick Bergt of the Alaska Oil & Gas Association told Fox News in an interview. “Alaskans are always looking for what’s next, and that’s because we want to play a role in helping maintain the energy advantage America now enjoys.”

“ANWR has always been a political football,” Daniel Turner of Power the Future told Fox News in an interview. “These folks in rural communities where you find our energy … they don’t ever have voices in D.C., yet people in D.C. have no problem making decisions about their lives.”

“This is HUGE news – and an incredible step toward climate justice! ANWR must be protected from Big Polluters. Thank you, @Interior!” Al Gore’s environmentalist group Climate Reality wrote on Twitter.

“The Biden administration’s actions are not unexpected but are outrageous nonetheless,” Murkowski said in a statement Tuesday. “Suspending leases in Alaska’s 1002 Area is in direct conflict with the 2017 Tax Cuts and Jobs Act, through which Congress mandates an oil and gas leasing program be established on the non-wilderness Coastal Plain, and ordered at least two lease sales by 2024.”

However, both Murkowski and Sullivan voted to confirm Haaland in March, and Young introduced her at her confirmation hearing. 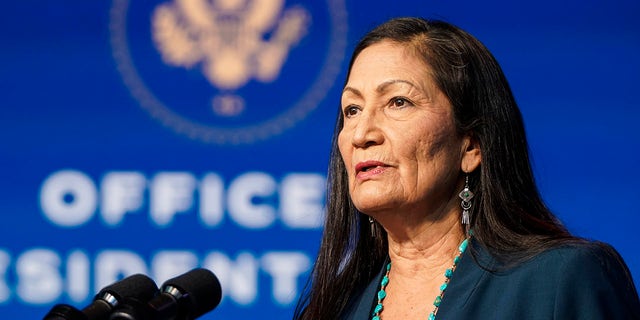 “Alaska’s senators voted for Deb Haaland. … [She] has a very clear track record of her beliefs, her hatred for the fossil fuel industry,” Turner told Fox News. “This is just the beginning.”

The Bureau of Land Management had already issued 10-year leases on nine tracts spanning more than 430,000 acres in accordance with NEPA during the Trump administration. ANWR covers more than 19 million acres.

“When people talk about ANWR, I don’t think they understand the size. … It’s a huge, huge area,” Bergt told Fox News. “As some of our other traditional royalty fields, they’ve been in play for 20 or 30 years, as they wind down, Alaska and Alaskans are always looking for the next play, and ANWR would help keep oil in the pipeline.”

But the Biden administration has made other calls that will be good for the Trans-Alaska Pipeline System, Rebecca Logan, CEO of the Alaska Support Industry Alliance, told Fox News in an interview. She highlighted the Biden administration’s recent decision to defend the Willow project, a ConocoPhillips oil drilling project facing legal opposition from environmentalist groups.

“That is the more important decision to focus on,” Logan told Fox News. “We’re disappointed in the [ANWR] decision, but it didn’t have an immediate impact on anybody with regards to work.”

“We certainly promote the responsible development of the 1002 area. It does have a lot of potential,” she added.

However, Logan did find the possibility that the 10-year leases could be nullified by the Biden administration troubling.

“A contract signed with the American government, and now you’re not honoring that commitment?” she said.

“What business now wants to invest in any opportunity if they think Joe Biden or Deb Haaland can say, ‘I don’t like this, and I’m going to decide they can’t continue’?” he said.

Alaska’s oil and gas industry contributed $3.1 billion to state and local governments in fiscal year 2019, according to the Alaska Oil and Gas Association.

“The people of Alaska have wanted to open [part of ANWR] for oil and gas exploration … for decades,” Turner said. “It’s revenue for the state. It’s jobs.”

“These green jobs we have yet to see … do we really think Joe Biden is going to push Alaska as a primary location for his wind or solar pipe dreams?” Turner continued. “They’re going to go to states that will help him in 2024.”