President Biden and French President Emmanuel Macron spoke over the phone Wednesday amid diplomatic tensions following the United States’ new trilateral agreement with the United Kingdom and Australia, with both leaders agreeing that the situation would have “benefited from open consultations” among allies.

The call between Biden and Macron took place to in the aftermath of the AUKUS agreement, announced last week, which is set to focus on developing Australia’s nuclear-powered submarine capabilities – an effort France was working to undertake with Australia.

Blindsiding France with the deal has been another blow to Biden’s assertion that “America is back”; the U.S. president sought to reassure allies in a speech at the United National General Assembly this week.

“The two leaders agreed that the situation would have benefitted from open consultations among allies on matters of strategic interest to France and our European partners,” the White House statement read. “President Biden conveyed his ongoing commitment in that regard.”

Biden and Macron, on the call, “decided to open a process of in-depth consultations, aimed at creating the conditions for ensuring confidence and proposing concrete measures toward common objectives.”

“They will meet in Europe at the end of October in order to reach shared understandings and maintain momentum in this process,” the statement read.

Following the announcement of AUKUS last week, Macron recalled its ambassadors from the U.S. and Australia, but during the call Wednesday, Macron “decided that the French Ambassador will return to Washington next week,” and that the ambassador will “start intensive work with senior U.S. officials.” 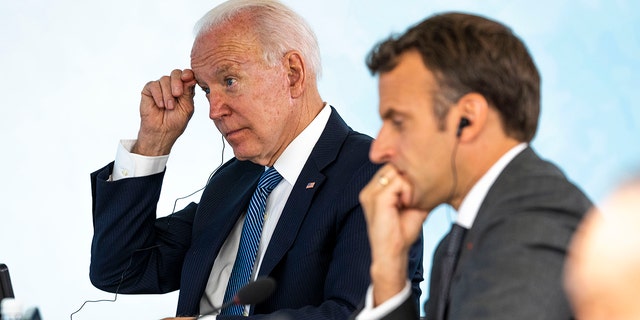 Meanwhile, Biden reaffirmed the “strategic importance” of French and European engagement in the Indo-Pacific region – which AUKUS sought to address.

“The United States also recognizes the importance of a stronger and more capable European defense, that contributes positively to transatlantic and global security and is complementary to NATO,” the statement read. “In the framework of their joint fight against terrorism, the United States commits to reinforcing its support to counter-terrorism operations in the Sahel conducted by European states.”

France previously made an agreement to send French-made submarines to Australia. Under the trilateral agreement, France is expected to lose a nearly $100 billion deal to build diesel submarines for Australia under the terms of the initiative, which will see the U.S. and Britain help Australia construct nuclear-powered ones.