In media news today, CNN suspends Chris Cuomo ‘indefinitely,’ ‘The View’s’ Sunny Hostin argues the liberal host did nothing ‘illegal,’ and Bill Nye gets roasted for a TikTok video with President Biden.

Bloomberg Politics was torn apart on Twitter after the self-described “non-partisan” news outlet suggested that China was “vindicated” for their approach to containing COVID-19 after the discovery of the new omicron variant.

“The emergence of a new coronavirus variant has provided some vindication for China’s Covid Zero approach, which has kept strict border controls in place since the start of the pandemic,” the account tweeted on Wednesday. 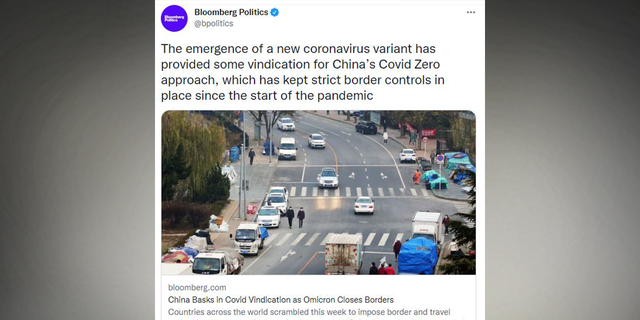 A December 1, 2021 tweet from Bloomberg Politics about China’s handling of the COVID pandemic.

Twitter was not kind to Bloomberg Politics’ choice of words.

“They literally welded sick and dying people inside their homes you absolute shameless f—-. This is an actual real tweet and story,” wrote Stephen L. Miller. The Spectator contributing editor also urged other Twitter accounts to reply to the Bloomberg Politics tweet with a picture of the Taiwan flag, “just so they see it.” Several accounts obliged Miller’s request.

The linked article entitled “China Basks in COVID vindication as omicron closes borders” also drew fire for how it characterized China’s approach to containing the virus.

“While other places pivot to living alongside the virus, China has prioritized weeding out every last infection, saying the health of the population is its main priority – and economic benefits will follow,” the article reads.

Pluribus editor Jeryl Bier described the article’s use of the phrase “weeding out” as “quite the euphemism.”

This is not the first time the media has appeared to praise the communist nation’s response to the COVID-19 pandemic.

China has come under fire repeatedly from U.S. foreign allies, Republican lawmakers, and national security experts since the beginning of the pandemic. A number of reasons for the criticism have been cited, including accusations that the Chinese government intentionally spread misinformation to downplay the risk of the virus, a refusal to cooperate with world health authorities, censorship of doctors and journalists, as well as the malicious disregard for the health and well-being of its citizens and the ethnic minority Uyghur Muslims.