BuzzFeed CEO: We can build a better internet

New York (CNN Business)BuzzFeed News has a new editor in chief. His first month has been anything but LOL.

Even before his first official day on the job, Mark Schoofs attended an all-hands meeting about furloughs stemming from the pandemic’s economic impact. But Schoofs was ready for a challenge at a media company he already knows well. The Pulitzer Prize winning journalist first joined BuzzFeed in 2014 from ProPublica to lead the investigations team. In 2018, he left to teach at USC Annenberg School of Journalism but returned to replace Ben Smith, who stepped down as editor in chief in January to be the New York Times’ media critic. 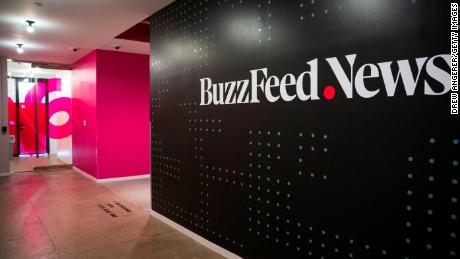 Schoofs spoke with CNN Business on his decision to rejoin BuzzFeed and what he hopes to change internally.

This interview has been edited and condensed.
Why did you take the job?

I would say that the one on unions was really interesting. I want to be careful here because I don’t want anybody in a union -— ours or any other union — to misconstrue what I’m saying. His point was that unions are kind of fighting for scraps. There are a lot of companies, media companies and news companies, that are financially strapped and a part of the reason that they’re financially strapped is that the big platforms have taken a lot of the advertising and have not given nearly as much back as they’ve taken. Now they have made some steps in the right direction and I want to praise the platforms for having made those steps, but it’s still not nearly enough.
It made me think about one of the larger missions that I have, which is to make sure that BuzzFeed as a company and BuzzFeed News as a division is as financially sound as it possibly can be so that we never ever have to go through a period of furloughing again and that we can make sure that all of our great journalists continue to have great jobs. Honestly, these days I think about that at least as much as I think about anything else and probably more.
Source: Read Full Article