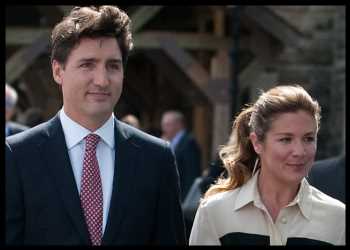 Canadian Prime Minister Justin Trudeau decided to go in isolation for two weeks after his wife, Sophie Gregoire Trudeau, tested positive for the novel Coronavirus or Covid-19 on Thursday.

Sophie was tested for the virus after having flu-like symptoms after returning from London recently. She will be in quarantine for 14 days.

A statement from the prime minister’s office on late Thursday said, “The Prime Minister is in good health with no symptoms. As a precautionary measure and following the advice of doctors, he will be in isolation for a planned period of 14 days.”

However, as he is not experiencing any symptoms, Trudeau wouldn’t be tested for the virus at this stage. The PM will continue to fully assume his duties and will address Canadians on Friday, his office said. Trudeau’s scheduled meetings in these days have been postponed.

In a personal note, Sophie said that although experiencing uncomfortable symptoms of the virus, she will be back on her feet soon.

In Canada 138 confirmed coronavirus cases have been reported, and one death as of March 12. In the 10 provinces, seven have recorded infections. In Ontario, the most populous province, authorities ordered all schools to close from Saturday to April 5.

According to the World Health Organization, the coronavirus has infected more than 132,500 people and killed nearly 5,000 worldwide.

At present, a number of politicians and prominent personalities worldwide have either been tested positive for the virus, or are in isolation.

British MP Nadine Dorries, a junior minister in the health department, Oscar-winning actor Tom Hanks and his actress wife Rita Wilson, and BT Group plc’s Chief Executive Officer Philip Jansen were all tested positive for the virus, and in quarantine.

Five senior US Republicans and a Canadian cabinet minister are also in self quarantine due to possible contact with the virus.