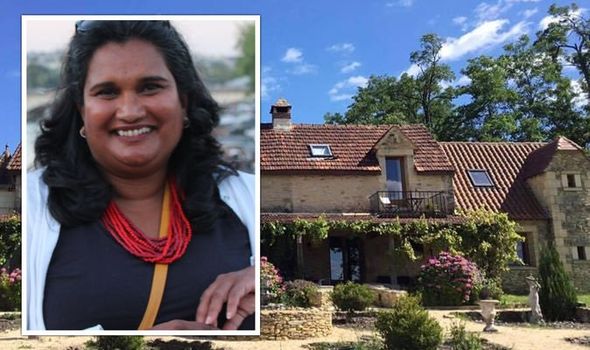 British expat Enasha de Zoysa will be appearing on Channel 5’s new series Allo! Allo! Brits in France. Season one of new series follows the lives of British expats who have decided to make France their new home. One episode of the programme follows Enasha on her dating journey as a single mum in France.

She’s been so busy renovating and looking after her son, Enasha hasn’t had the time to date and find Mr Right.

With the help of her friends, she sets up a dating profile on the hunt for a partner.

The pioneering mum to 11-year-old Xavier has managed to renovate a barn and set up her own business in the beautiful Dordogne in southwest France.

Enasha, 51, was born in Sri Lanka and moved to the UK when she was two, and grew up in both London and Maidstone in Kent.

It was a twist of fate that set Enasha on a path to rural France.

After visiting her parents, Enasha became reacquainted with an old friend she hadn’t seen in over 25 years and decided to take a weekend away to his small gîte in France.

The pair “hit it off” and she visited him again a few weeks later.

When she returned to the UK, her work schedule cleared and she realised now would be the perfect time to make the move.

She decided to rent out her flat and “give it a go”.

Two and half years after the couple moved in together, they had Xavier, and bought a bigger gîte which Enasha now calls her home.

The couple began renovating the gîte together but eventually decided to separate in 2016, prompting Enasha to purchase the rest of the property.

The beautiful gîte, which took Enasha 10 years to completely renovate, is a haven for city dwellers looking to escape the bustle of the city for fresh air and lush landscapes.

Located just 10 minutes from Sarlat-la-Canéda, the property is a country escape located close to local amenities.

The property itself includes five acres of land and one large building which has been split up into two gîtes.

One of the gîtes is the original one-bedroom house, the second gîte was a log store and local bread oven – which can still be found at the back of the kitchen.

The converted barn part of the building is where Enasha now lives.

Having spent over 10 years of her life in France, Enasha has shared her advice and tips for Britons looking to move and buy a property in France.

While it may be tempting to take the plunge and buy a home in rural France, Enasha said you should test the waters first.

She told Express.co.uk: “I would probably rent first to get an idea of what area you like.

“It depends whether you’ve got children. If you do, you need to go somewhere that has a school to start with.

“If you don’t have children, then you may have a little bit more choice.

“But really, although most people say ‘I don’t want to live near British people’, actually it’s quite nice.”

Enasha said she speaks fluent French but it’s often nice to be able to speak to English people.

“Try not to isolate yourself too much when you come over,” she added.

When you emigrate abroad, Enasha said you often learn a lot from other people who have already made the move.

She said it’s “most important” not to over-commit yourself to a property.

In the UK, property prices have increased dramatically over the last 18 months.

This year alone has seen house price growth increase by 11.8 percent with the average house price reaching £270,000 in November 2021 – a record high.

Owning property in the UK as well, Enasha said the value of a home in Britain “only ever goes up”, however, this isn’t necessarily the case in France.

She explained: “You can’t come to France thinking that you’re going to make a killing on property because you won’t.

“It’s much more expensive to renovate, especially a place like this [a gîte].

“You need to be sure of the area you want to live in because once you’ve bought a house, you’re probably going to be there for a really long time.

“Houses take a long time to sell too. People either want something cheap which has had nothing done to it or they want something that’s completely done and they can move in – but obviously they’re so much more expensive.”

Enasha, who used to be an accountant in the UK, said Britons should try and come up with a budget before they decide to embark on a one-way trip to France.

She said: “Generally, as a rule of thumb, if you’re renovating and you have a budget, just double it and then it will come in somewhere between the two!

“You don’t come to France to make loads of money, you do it for the quality of life which is definitely here.”

If you fancy staying at Gîte Les Fontanelles check out the website here.