China’s Evergrande halts trading after ordered to tear down apartments

Chinese developer shares tumbled following local media reports that China Evergrande Group has been ordered to tear down apartment blocks in a development in Hainan province. Evergrande halted trading in its shares.

An index of Chinese developer shares slumped 2.8 per cent as of 11.37 a.m. local time, with Sunac China Holdings and Shimao Group Holdings plunging more than 10 per cent. A local government in Hainan told Evergrande to demolish 39 buildings in 10 days because the building permit was illegally obtained, news wire Cailian reported on Saturday.

Evergrande gave no details on the trading suspension other than saying it would make an announcement containing inside information. 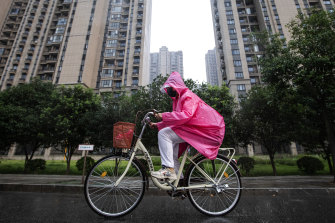 A resident cycles through an Evergrande community in Wuhan.Credit:Getty Images

The government of Danzhou, a prefecture-level city in the southern Chinese province of Hainan, asked Evergrande to tear down 39 illegal buildings in 10 days, Cailian reported on Sunday, citing a document from the local government.

The report cited the document, which was dated December 30, as saying that the Danzhou government said an illegally obtained permit for the buildings had been revoked so the buildings need to be dismantled.

Evergrande didn’t immediately respond to a request seeking comment and calls to Danzhou authorities went unanswered on a public holiday in China on Monday.

The company on Friday dialed back payment plans on billions of dollars of overdue wealth management products as its liquidity crisis showed little sign of easing.

Property firms have mounting bills to pay in January and shrinking options to raise necessary funds. The industry will need to find at least $US197 billion ($271 billion) to cover maturing bonds, coupons, trust products and deferred wages to millions of migrant workers, according to Bloomberg calculations and analyst estimates.

Beijing has urged builders like China Evergrande Group to meet payrolls by month-end in order to avoid the risk of social unrest.

Contracted sales for 31 listed developers fell 26 per cent in December from a year earlier, according to Citigroup Inc. analysts. Evergrande’s sales dropped 99 per cent, the analysts wrote in a note dated Sunday.