Energy giant AGL is expected to face significant hurdles in its push to split off its coal and gas-fired power plants from its retail business as analysts warn investor appetite for the emissions-intensive generation fleet may be low.

The nation’s largest power supplier outlined a proposal this week to split itself into two companies in response to the accelerating clean-energy transition: “New AGL”, incorporating AGL’s electricity, gas and telecommunications retailing along with some energy assets, and “PrimeCo” which would own AGL’s largest thermal power stations and some wind farms. 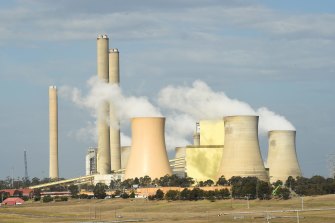 Although in favour of the split’s strategic rationale, analysts immediately cast doubt over AGL’s ability to hive off PrimeCo either through a demerger or divestment at an acceptable valuation.

Tom Allen, head of energy and utilities with investment bank UBS, said PrimeCo would be a “highly volatile, commodity-exposed and emissions-intense business”.

“While we recognise New AGL offers a much cleaner investment proposition than current, we point to the risk that investor appetite may be very low for PrimeCo,” Mr Allen said.

AGL’s strategy was “sound”, he added, but only if the company was able to offload PrimeCo at a valuation that did not lower the value of the sum of both businesses.

The move to divide up AGL’s operations and create the carbon-neutral New AGL – which would incorporate retail and some renewable energy assets – comes as energy suppliers face enormous pressure from the influx of wind and solar, which has been driving down daytime power prices and pummelling the profits of coal-fired generators.

As institutional shareholders globally seek to reduce their exposure to fossil fuels on ethical and financial grounds, AGL boss Brett Redman said he believed New AGL would appeal to investors who were increasingly concerned about environmental, social and governance (ESG) risks.

But other investors would be drawn to PrimeCo, he said, as it would rank as Australia’s largest supplier of power and play a key role in supporting the energy market’s transition to a greater uptake of renewables.

“Some will be interested in a business that has a very large role to play in the electricity market, will provide a good yield, will represent investment that can reinvest itself and can continue for a long time,” he said.

JP Morgan analyst Mark Busuttil said a lack of information provided by AGL so far made it difficult to assess how palatable the split would be. But he foreshadowed challenges concerning PrimeCo.

“With its exposure to coal assets, leverage to wholesale prices and currently weak spot prices, it is difficult to see how PrimeCo will be attractive to investors as a standalone entity,” he said.

In light of the challenges facing AGL’s proposed separation, JP Morgan downgraded the stock to ‘neutral’.

The Royal Bank of Canada, however, upgraded its view of AGL, saying the proposed split could be a “turning point” for the company after a prolonged period of share price weakness during which AGL has underperformed the broader ASX200 by 74 per cent.

“We believe AGL’s status as Australia’s largest carbon emitter in an ESG-focused world has been a key determinant in AGL’s underperformance,” RBC analyst Gordon Ramsay said.

“While the coal-fired generation side of the business has acted as a handbrake on potential investor flows in recent times, opportunity does exist to unlock value as part of the green revolution.”

AGL’s fleet of coal and gas-fired power plants is Australia’s heaviest source of emissions, accounting for 8 per cent of the nation’s greenhouse gases each year. AGL has announced it will close its ageing Liddell coal plant in NSW in 2023 but intends to keep operating NSW’s Bayswater plant until 2023 and Victoria’s Loy Yang A brown coal-fired power station until 2048.