Confusion and falsehoods: How we can fix the COVID trust gap and get people vaccinated

Health care workers wait for people wanting the COVID-19 vaccine at a mobile clinic at a public library in Pasadena, Texas, on April 30, 2021. (Photo: CECILE CLOCHERET, AFP via Getty Images)

The United States was No. 3 in the world early last month in getting at least one dose of  COVID vaccine into adult arms. Even though nearly two-thirds of American adults have now received a dose, as of this week we had slipped to No. 8. How can America surge again to the top?

One key is addressing the nearly 1 in 3 people who are hesitant or unsure about getting vaccinated. We all have friends and family members who have expressed concerns.

In doing the research for this article, the most common response we heard from colleagues was, “You’re wasting your time. Anti-vaxxers aren’t going to get vaccinated regardless of what you say.” It’s true that some are set in their ways. But most of the unvaccinated are still open to the idea. Indeed, polls show steady declines in the numbers of people who said they won’t consider getting vaccinated.

Being hesitant doesn’t mean never. Many people have been hesitant but decided to get the vaccine. It’s time for all of us to redouble our efforts to reach the unvaccinated.

Let’s be honest here, medical authorities and the news media haven’t exactly covered themselves in glory when it comes to providing accurate and well-calibrated information about the pandemic.

And hundreds of Americans are still dying each day from the pandemic and nearly 17,000 are in the hospital.

People need more information about vaccine safety. But too often, concerns about getting vaccinated are met with patronizing and paternalistic lectures that are short on empathy. We’ve spent a lot of time over the past few weeks listening. We’ve made a list of some of the most common issues, and we will try to address them here as best as we can.

Many are concerned about adverse events. We now know an incredible amount about safety, far more than we did just a few months ago thanks to the Vaccine Adverse Event Reporting System. It’s based on the results of the massive 2.2 billion doses delivered worldwide so far. The data shows the risks are very low. The Pfizer and Moderna (mRNA) vaccines, for example, appear to be among the safest vaccines ever administered.

At the same time, with the more dangerous variants becoming dominant, the risks of COVID-19 are increasing each day for those unvaccinated.

One of the most common concerns is about side effects, particularly whether they could result in missing work. There is a risk of an acute allergic reaction to the vaccine, but this usually occurs within minutes after getting the vaccine, and it is easily and completely treatable.

Doctors: Essential workers should get two days of paid leave for vaccine side effects

Feeling unwell after the vaccine occurs in about half who are vaccinated (which might include tiredness, chills and muscle pains). But these are almost always mild symptoms that usually disappear fully in a day or two and often only occur after the second dose of the mRNA vaccines. Even if these symptoms cause you to miss work, it’s very unlikely to be for more than a day. On the other hand, symptoms from COVID-19 can cause you to miss weeks of work and be very severe, frightening and long lasting.

Another worry that we’ve heard frequently is about clotting. Clotting is not associated with the Pfizer or Moderna vaccines at all. There have been some very rare examples of clotting with the Johnson & Johnson vaccines. One of us recently wrote a paper examining this in great detail and found that treatments for this clotting have greatly improved since it was first discovered. Because it is so rare, the upside of the vaccine protection is far greater than the downside of the tiny risk of clotting. 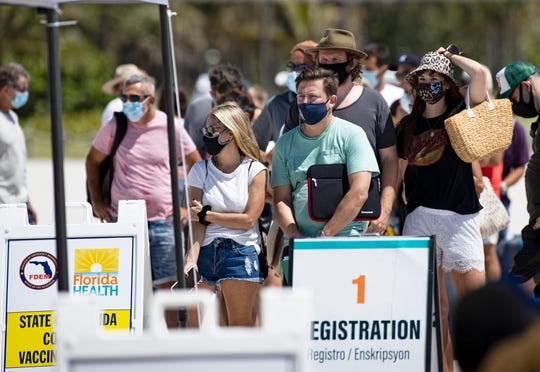 People line up to receive a Johnson & Johnson vaccine in Miami Beach on May 2, 2021. (Photo: David Santiago, AP)

While recent research has found that 12% of Americans decided to “wait and see,” now that billions of doses have been administered worldwide, there isn’t much more to wait for. The mRNA vaccines have been through three decades of research and many trials. The other vaccines are based on an old and very established technology known as adenoviral vector. Another billion doses isn’t likely to tell us anything new.

Furthermore, wait and see could have disastrous consequences. The virus is becoming more and more virulent. It’s already at a point now where some scientists are concerned that even masks and lockdowns can’t control the spread. A significant new outbreak could grow so quickly that people couldn’t get vaccinated in time – especially considering that it takes two doses for the mRNA vaccines and several weeks before complete protection is provided.

Another concern we’ve heard is that liability for doctors giving vaccines has been waived, raising the question of why this is necessary if the vaccine is really safe. There’s a kernel of truth in this claim: The Public Readiness and Emergency Preparedness Act, signed in 2005 by President George W. Bush, removes the right to sue for persons injured by a covered vaccine (including the COVID-19 vaccines). It was designed mainly to help ensure that drug companies invested in developing vaccines in an emergency. The legislation was controversial even at the time it was written, but its existence doesn’t imply anything about the safety of the COVID-19 vaccines; it predates them by 16 years.

One of the challenges with providing this kind of scientific information about vaccine safety is that some people profit from driving people away from vaccines. We saw this firsthand when Alex Jones, who makes money by selling unproven medical products, dedicated an episode of his radio show to claims that the spike protein in vaccines is causing harm. But in fact, one of us worked on a paper which clearly showed the exact opposite.

Unfortunately, such incorrect, financially motivated claims can spread rapidly. Social media has been an incubator of anti-vaccination messaging. In the battle between sober science and emotionally charged videos, science is at a disadvantage.

But we can all do our bit to research and understand the truth around vaccines, and to make sure our friends, relatives and communities have the facts. Working together, we can help people overcome their hesitancy, get vaccinated and protect themselves, their families and the nation.

Jeremy Howard (@jeremyphoward) is a Distinguished Research Scientist at the University of San Francisco. Nick Talley, M.D., (@Prof_NickTalley) is an Adjunct Professor of Medicine at the University of North Carolina and Editor-in-Chief of the Medical Journal of Australia.

You can read diverse opinions from our Board of Contributors and other writers on the Opinion front page, on Twitter @usatodayopinion and in our daily Opinion newsletter. To respond to a column, submit a comment to letters@usatoday.com.