Cost of living causing Brits to cut back ahead of Christmas 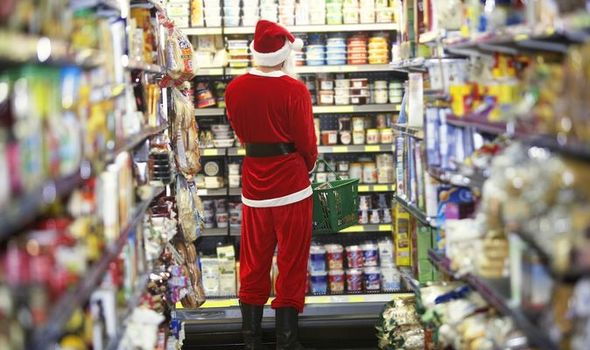 Households plan to cut back on or stop buying popular varieties of food and drink amid concern about rising prices. Many people are planning to buy not only fewer luxury items but less meat, fish and cheese. The polling by Survation found that nearly seven out of 10 people (69 percent) have been personally impacted by rises in prices for food (including alcohol) and energy costs. Sixty-three percent were affected by the increase in fuel costs.

Shoppers are planning to make savings by scaling back their purchases.

Almost half (49 percent) plan to buy restaurant takeaways less often, while four out of 10 expect to purchase fewer bottles of spirits, and 39 percent anticipate buying less beer and cider, chocolates and sweets and cakes and biscuits.

More than a third (34 percent) say they will buy less red meat, with a quarter cutting down on fish purchases and 22 percent buying less cheese.

The research, commissioned by the UK Spirits Alliance, comes as concern mounts that a combination of rising inflation and higher taxes will leave families worse off.

Seven percent of shoppers say they will stop buying restaurant takeaways completely, and one in 20 (five percent) will quit purchasing spirits.

Liam Manton, founder of Didsbury Gin in Manchester, warned of a “tragedy for the industry”.

He said: “With over 20 million people expecting to enjoy a gin and tonic or cocktail in a bar or restaurant this festive season, the high tax burden on spirits is already starting to pinch as the cost of living rises… Whilst we promote drinking responsibly, seeing consumers look to cut back due to a rise in the cost of living and because of the high level of spirits duty is a tragedy for the industry.”

There is disappointment that Chancellor Rishi Sunak did not do more to help Scotch Whisky in the Budget, which featured tax cuts for sparkling wine, draught beer and cider.

A spokesperson for the UK Spirits Alliance said: “We really need the Chancellor to look again at the proposed changes to alcohol duty. Beer and cider have got specific help but spirits like the great British gin and tonic and Scotland’s national drink, Scotch Whisky, have been passed by for long-term support.

“The new duty system must tackle the competitive disadvantage spirits face and creates a simpler, fairer system that back jobs, growth and consumers”.

Inflation is expected to average four percent next year, with the Office for Budget Responsibility saying it could hit the “highest rate seen in the UK for three decades” and the Institute for Fiscal Studies (IFS) warning that “millions will be worse off in the short term”.

Professor Len Shackleton, a research fellow with the Institute of Economic Affairs, did not hide his disappointment with the choices the Chancellor made in last week’s Budget.

He said: “The faster-than-expected recovery and low unemployment gave the Chancellor an unexpected opportunity to cut taxes. Instead he has shovelled money into an unreformable public sector which for the most part has not distinguished itself by its performance during Covid, and restored the discredited foreign aid budget.

“Marginal reductions in the price of beer, fizzy wine and internal flights do not help families worried about greatly increased heating charges, rising fuel prices and the threat of uncosted green commitments… People should be given back the freedom to make their own decisions, rather than constantly badgered into changing their lifestyles and consumption patterns to suit the agenda of living-in-a-bubble politicians who do not understand the impact of their policies on ordinary families, and who are stoking up inflation which will erode living standards further.”

The Centre for Policy Studies (CPS) is alarmed at the increases in public spending and the consequent taxes, warning that prime minister will “usher in the era of the trillion-pound British state”.

Tom Clougherty, head of tax at the CPS, said: “Britain is becoming a high tax, high spend country – this is the age of record tax burdens and a trillion pound state. Living standards are already under pressure and these tax rises coming next year are going to hit working families’ take-home pay hard.

“More spending ultimately means higher taxes – and in the long run, it is always ordinary people and small business that bear the brunt.”

The Chancellor introduced a raft of measures in the Budget to help low income families, including an increase in the national living wage to £9.50 an hour and a rise in the work allowance – the amount people can earn before starting to lose Universal Credit (UC) – to £500. The “taper rate” will also be cut so people on Universal Credit will see their benefit fall by 55p instead of 63p for every £1 they earn above the work allowance.

The Resolution Foundation is concerned about the impact of the end of the £20 a week uplift to UC, which was introduced during the pandemic.

Senior economist Karl Handscomb said that for the 4.4million households already on UC, the changes will “still leave the poorest fifth of households £280 a year worse off overall”.

A Treasury spokesman defended its support for both the spirits industry and families.

He said: “As well as a historic simplification of the UK’s outdated alcohol tax system, we’ve frozen alcohol duty eight times over the last nine budgets which means that – after inflation – spirits duty rates are at their lowest levels since 1918. This will save consumers £3billion over the coming years.

“The government is taking targeted action worth more than £4.2billion a year to help families with the cost of living, and our Plan for Jobs is supporting living standards by getting people into work and helping them progress.”

Duty reform is a step in the wrong direction for Scotch

REFORM of the UK’s outdated system for taxing alcohol is so overdue that Chancellor Rishi Sunak heralded his reform proposals as “the most radical simplification of alcohol duties for over 140 years.” Fundamental reform of tax happens rarely, so when there is an opportunity it is vital that the Treasury gets it right.

The Chancellor said the new system would be “simpler, fairer and healthier.” I take him at his word, that he is aiming for a better system – and that is why there is still time to change course and move away from these proposals which will make the system even more unfair for distillers across the UK.

The Chancellor is right, the system he proposes is simpler. It reduces a complex system of 15 different tax bands to a complex system of 6 tax bands. As the Centre for Policy Studies points out, under the planned changes there would still be “unnecessary complexity”. A far simpler system would be to more closely link tax to alcohol content, not alcohol strength.

The proposed reforms cannot be described as “fairer”. Per unit of alcohol, Scotch Whisky and other spirits are already taxed more than beer, wine and cider. These proposals deepen that competitive disadvantage. A pint of 4% cider, which contains more alcohol than a gin and tonic or a Scotch Whisky cocktail, will still pay less tax. To make things worse for distillers, the ‘draught relief’ proposed for beer and cider isn’t being extended to spirts – despite spirits accounting for a third of sales across the hospitality sector.

Nor is the proposed system “healthier”. Tax on a pint of 4-4.5% abv cider will actually fall further under the plans – despite cider already being the lowest taxed category of alcohol. The Chief Medical Officer guidelines of low risk consumption do not discriminate between different types of alcohol, so why will the tax system persist in doing so even after so-called “radical” reform?

The Chancellor has a chance to look again at the reforms and, in the words of the UK government, “ensure our tax system is supporting Scotch Whisky and gin producers.” As currently set out, the plans fall well short of meeting that commitment, backing the UK’s world class spirits industry, and introducing the “simpler, fairer and healthier” system the Chancellor wants.

Graeme Littlejohn is the Scotch Whisky Association Director of Strategy