Roaming the convention space of a luxury hotel near Disney World, CPAC delegates wear Make America Great Again hats and display Trump pins. They pose for pictures beside a “Golden Trump,” a fiberglass mold statue of the ex-president painted in gold, holding star-shaped wands and wearing a coat-and-loosened-tie, beach shorts in a U.S. flag motif and flip-flops.

“This (conference) is conservative, and conservatives are for Trump,” said Tommy Zegan, 61, the artist and creator of the work he calls “Trump and the Magic Wand.”

Matt Schlapp, chairman of the American Conservative Union and an organizer of CPAC, said it is “the Conservative Political Action Conference that loves Donald Trump because he was a great president.” 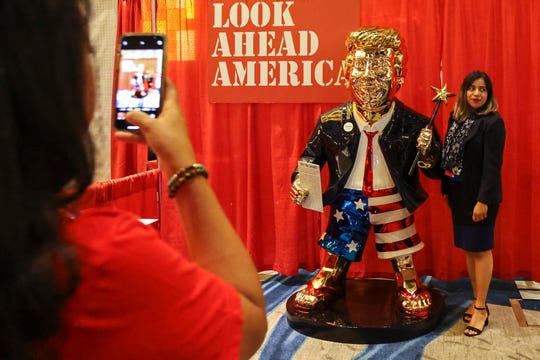 Delegates, most of them masked for COVID, said they don’t know if Trump will seek the presidency again in 2024, but said they wouldn’t mind it. They are looking forward to the Trump speech that closes the four-day conference on Sunday, his first public appearance since his presidency ended on Jan. 20.

CPAC members also said they like other potential candidates who used the conference, the nation’s gathering of conservative activists, to promote ideas ranging from lower taxes to implacable opposition to President Joe Biden and his administration.

“I think the main message here is, it’s not about one individual,” said Michelle Heldmyer, 59, a retired attorney from Port Charlotte, Florida. She is also a volunteer for a voter education organization called Look Ahead America, which planted the Trump statue at its booth in CPAC’s exhibition space.

“It’s about the Constitution, it’s about freedom, it’s about taking our country back,” she said, adding: “Trump has just epitomized that better than others.”

Some outside political analysts said CPAC has sold out to the cult of Trump, despite his election loss and his proximity to the Jan. 6 insurrection at the U.S. Capitol.

“They had a chance to move forward after 1/6, but Republican voters want Trump,” said Tim Miller, a former GOP strategist who has left the party. “And rather than try to counter that, Republicans have chosen submission and erected a Trump golden idol.”

“We’re not the past,” Hawley told CPAC attendees. “We’re the future.”

Another speaker – Donald Trump. Jr. – told delegates that his father’s speech Sunday will show that the “MAGA movement” still represents “the future of the Republican Party.”

Speakers and panelists throughout the day mentioned Trump only occasionally, but promoted many of his issues.

They attacked the Biden administration on items ranging from China to energy development. Hewing to the conference’s theme of “America Uncanceled,” GOP leaders told conservative activists they were “under attack” by big government, big media and big tech.

What is CPAC? A brief history of the conservative movement’s most influential gathering

Speakers and panelists also discussed social protests in major cities (but not the Jan. 6 insurrection) and “protecting elections” (code for Trump’s evidence-free complaints about the 2020 election).

Some speakers also took after the Republican “establishment,” some of whom have urged the GOP to move past Trump and look for other candidates.

“We cannot, we will not, go back to the day of the failed Republican establishment of yesteryear,” DeSantis said.

Another Floridian, Rep. Matt Gaetz, R-Fla., singled out and attacked Rep. Liz Cheney, R-Wyo., the House’s third-ranking Republican, who this week said Trump should not be part of the Republican Party’s future.

Gaetz also used stereotypes to talk about another big conference topic: COVID restrictions on businesses and large gatherings, rules less restrictive in the Sunshine State than in places like New York.

“Florida’s like an amazing woman – adventurous, beautiful, mostly sunny, sometimes a little crazy, and always here to encourage and support success,” Gaetz said. “By contrast, New York is like a bad ex-husband – mean, won’t let you go out to dinner; you’re less safe, financially spiraling downward, and they may kill your grandparents!”

CPAC officials received some vocal resistance from the conference crowd when reminding them to respect the hotel's mask rules.

COVID-19 is why this is the first CPAC held outside the Washington, D.C., area, where tight restrictions reign. Last year, the CPAC event spawned an outbreak of the coronavirus.

Nearly all the attendees in Orlando wore masks – some emblazoned with Trump or MAGA logos – but the concept of social distancing fell apart when delegates massed near celebrities like Cruz or Fox News host Judge Jeanine Pirro.

A ‘family reunion’ for conservatives

Some CPAC delegates said they expect Trump to run, some said he may decline, and most said no one knows for sure. If he does run, they said, he can count on support from groups like CPAC.

“We need him more than he needs us,” said Caroline Sarian, an entrepreneur from St. Louis who turns 54 on the Sunday that Trump speaks to CPAC.

It’s a very festive atmosphere at CPAC. Friends see like-minded colleagues from other parts of the country while making new connections. Many share memories of past conference stars like Ronald Reagan and the recently deceased Rush Limbaugh.

Congressional and state politicians mill about, giving interviews on “radio row” or taking selfies with voters.

As with previous CPACs, vendors set up booths to sell wares. They can be conservative ideas – there’s an institute named for Austrian economist Ludwig von Mises – or signs of simpler pleasures like beer mugs and wine glasses.

Vendors ranged from the Conservative Curriculum – “Building a Biblical Worldview” – to “Atheists for Liberty;” there are the “Young Conservatives For Carbon Dividends,” and there are “Cigar Smokers for Trump.”

“This is the annual family reunion for conservatives,” said Timothy Shea, 58, co-founder of an organization called the MAGA Institute. “It’s kind of an ecosystem.”

Delegates who talked up Trump downplayed the impact of the Jan. 6 insurrection. Some blamed bad apples – or left-wingers – for the violence, while others said the invasion was wrong but not that bad.

“In essence, the whole thing was blown out of proportion,” said Ronald Solomon, 61, an investment banker and businessman from Las Vegas running a Trump merchandise stand.

“The bottom line is that all the conservative organizations and events are vehicles that candidates use to get themselves exposed to voters,” Solomon said. “CPAC is obviously the largest one.”

At the 2021 CPAC, Texas Senator Ted Cruz tried to make light of his recent vacation to Mexico while millions dealt with a winter weather disaster.