Save articles for later

Add articles to your saved list and come back to them any time.

Crown Resorts has conceded that criminals likely used two of its bank accounts to launder dirty cash, in a major admission to a public inquiry that is reviewing its Sydney casino licence.

Lawyers for the James Packer-backed gambling giant had previously urged Commissioner Patricia Bergin against finding that its bank accounts had, more probably than not, been used for money laundering despite being riddled with suspicious transactions.

However the NSW Independent Liquor and Gaming Authority inquiry heard on Wednesday morning that Crown tendered new statements at 11pm on Tuesday which outline a major about-face, based on two reviews of the accounts by consultancies Initialism and Grant Thornton. 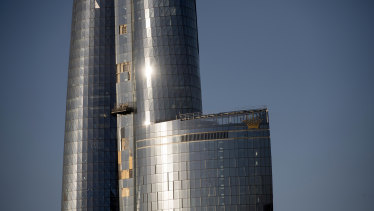 Crown was set to open the Barangaroo Casino in mid-December. Credit:Wolter Peeters

"Crown accepts that there were funds deposited into the Riverbank and Southbank accounts that Initialism has found to be indicative of 'cuckoo smurfing' – it is indicative of a form of money laundering," Crown's counsel Robert Craig, SC, said.

"Crown accepts that an inference can be drawn that at some point in time, deposits into the Southbank and riverbank accounts were more probable than not part of cuckoo smurfing."

The concession from Crown on Wednesday came as ILGA was set to meet to decide whether to prevent Crown from opening its new casino at Barangaroo next month, until the inquiry reports back on its findings by February next year.