A public hearing into probity and licensing issues involving James Packer's Crown Resorts and Hong Kong casino group Melco, which was due to recommence on Wednesday, has been postponed indefinitely due to coronavirus concerns.

On Monday the NSW Independent Liquor and Gaming Authority said the hearings would go ahead but added the caveat that the commissioner was carefully monitoring announcements and health advice from the Commonwealth and state governments with regards to COVID-19. 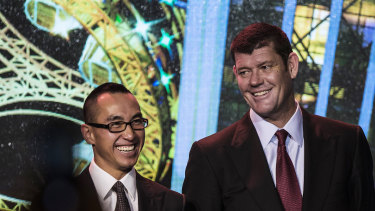 Melco boss Lawrence Ho (left) and James Packer have both been called to give evidence at the ILGA inquiry.Credit:Bloomberg

"As a result of of the recent reports and impacts of COVID-19 and in alignment with the changes that have been advised by the Commonwealth and state governments … it is with regret that the public hearings of the inquiry will be deferred to a date to be fixed," the authority said in a statement on Tuesday afternoon.

The regulator said that in making the decision the health and welfare of members of both the legal and broader community was the paramount consideration.

The inquiry was set up last year to investigate Mr Packer's sale of a 20 per cent stake in Crown to Melco, as well as revelations by The Sydney Morning Herald, The Age and 60 Minutes that Crown went into business with figures allegedly linked to organised crime and money laundering.

Peter Cohen, the former executive commissioner of the Victorian gambling authority who now works for the Agenda Group, was due to appear before the hearing on Wednesday, along with Crown chief legal officer Joshua Preston.

The gaming authority had a significant legal win last week, when the NSW government won an appeal to the full bench of the Supreme Court to gain access to Melco documents relating to its acquisition of Crown Resorts shares.

Melco has yet to decide whether it will appeal the decision.

It was not the only virus-related announcement from Crown on Tuesday.

The casino operator said it would provide an additional 14 days paid leave to any of its employees – whether full-time or casual – who faced COVID-19 challenges. This will help employees who have the virus, who come into close contact with someone who who has it, or are providing care for family members who are infected.

Crown also announced it has now extended its coronavirus response to its Perth casino, with one in two poker machines deactivated and gamblers prevented from sitting side by side as a prevention measure.

In a statement to the ASX this morning, Crown said that, following consultation with the West Australian government, it will implement an "equivalent social distancing policy" as of today.

This does not go as far as some overseas casino markets, such as Las Vegas and Macau, which have closed gaming outlets in response to the virus threat.

Measures announced yesterday for Sydney's The Star and Melbourne's Crown include deactivating every second poker machine and electronic table game, enforcing distancing at seated gaming tables between players and limiting the number of players at each stand-up table to five.

Bars, nightclubs, restaurants, ballrooms and conference facilities will be limited to 450 people at Crown's casino and 499 people at The Star.