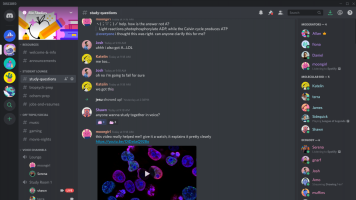 Discord: What to know about messaging app Microsoft is reportedly in talks to acquire

Might the popular messaging and chat app Discord be for sale?

Microsoft is exploring a potential acquisition of Discord for approximately $10 billion, according to Bloomberg. This followed a report Monday by VentureBeat that the chat platform used by video game players is looking into a potential sale.

So, what exactly is Discord? Here’s what to know:

When did it launch?

The app was launched in 2015 by co-founders Jason Citron and Stan Vishnevskiy. According to an about page on Discord, the duo wanted to create a platform that encouraged discussion and “recreated the feeling of togetherness” when playing video games.

“Discord was started to solve a big problem: how to communicate with friends around the world while playing games online,” reads an excerpt from its website.

A screenshot of the app Discord. (Photo: Discord)

Video games: Nintendo’s Pikmin will be inspiration for ‘Pokemon Go’ maker’s next game

Got Zoom fatigue?: Citigroup will roll out ‘Zoom Free Fridays’ to give workers a break

How does Discord work?

Chat spaces in Discord are broken up into communities called servers. The key difference between Discord and similar services is you join these servers through invite only. More public Discord servers will share that invite information directly through a link that takes you directly to the app and community.

You can also create your own server, which you can make as open or closed as you choose. It can feature a handful of your close friends you want to stay in touch with or a larger group with shared interests.

Discord offers an option to explore public servers, where they will list a group of featured communities broken down by sections including Gaming, Entertainment and Education. You can also search if you want something specific.

It’s like a hybrid between a messenger app and an online forum. When you first enter a server, you’ll see a pane on the left with the various open chats. The bigger ones will have several chats open organized by group. Discord has 13.5 million servers active per week.

Here’s an example: I’ve been playing a lot of NBA 2K21 lately, and I joined a Discord set up for fans of the video game. That left pane has sections for important information such as that server’s rules, announcements related to the game or community, and General where each game mode within NBA 2K21 has its own chat space. There’s also a section for players to find others to join them in online matches.

When you click something, it drops you into that specific chat, and runs very much like a messaging app. You’re basically just chatting back and forth with other members.

What are the benefits of Discord?

You have more than just text chat at your disposal. Users have the option to also chat via audio or video. You can even stream from the app. Servers can also host several separate chats at once, instead of having one larger, long chat, allowing server creators to carefully curate and organize.

How safe is it for kids?

In 2019, The Wall Street Journal reported on Discord’s darker side, where kids on some of the gaming servers were subjected to racist and sexist commentary as well as politically incorrect memes.

As with many social apps, Discord offers features to help filter the experience for younger users. You can have the app automatically scan and delete direct messages that contain explicit content. You can also adjust who can friend users on a server-to-server basis, says Discord.

“Users should only accept friend requests from users that you know and trust,” reads a safety guide on Discord’s website.

So is it just for video games?

Like Twitch, Discord is slowly morphing from a tool for video game players into a platform where users can connect on a variety of subjects. There’s one called Homework Help, where students can get assistance with assignments, and others for users who want to learn Korean or Japanese.

“Games are what brought many of you on the platform, and we’ll always be grateful for that,” said Citron last June. “As time passed, a lot of you realized, and vocalized, that you simply wanted a place designed to hang out and talk in the comfort of your own communities and friends.”