President Donald Trump demonstrated all the wrong ways to handle coronavirus exposure during a news conference Friday ― he touched a microphone others were using, shook hands and patted people on the back.

Trump has met with at least one individual who has tested positive for the virus: Fabio Wajngarten, an aide to Brazilian President Jair Bolsonaro who posed for a photo with Trump and Vice President Mike Pence while at Mar-A-Lago over the weekend. (Wajngarten is on the right in the photo.)

Trump has refused to self-quarantine, doing quite the opposite instead. He stood among a group of corporate executives on Friday as he declared a national emergency because of the coronavirus pandemic and refused to take responsibility for a lack of testing.

Other lawmakers who came in contact with Wajngarten, including Sens. Rick Scott (R-Fla.) and Lindsey Graham (R-S.C.), self-quarantined out of an abundance of caution. Trump argued Friday that he didn’t need to isolate himself because he’s “not coming back from someplace” abroad and he spent “seconds” with Wajngarten.

“There was somebody that they say has it. I have no idea who he is, but I take pictures and it lasts for literally seconds. I don’t know the gentleman that we’re talking about, had no idea who is. I haven’t seen the pictures,” Trump said. “It is a picture of somebody, but I take sometimes hundreds of pictures a day. And that night I was taking hundreds of pictures, so I just don’t know.”

The Centers for Disease Control and Prevention says the virus can spread between individuals who are within 6 feet of each other. It’s possible for someone with no symptoms to get another person sick. 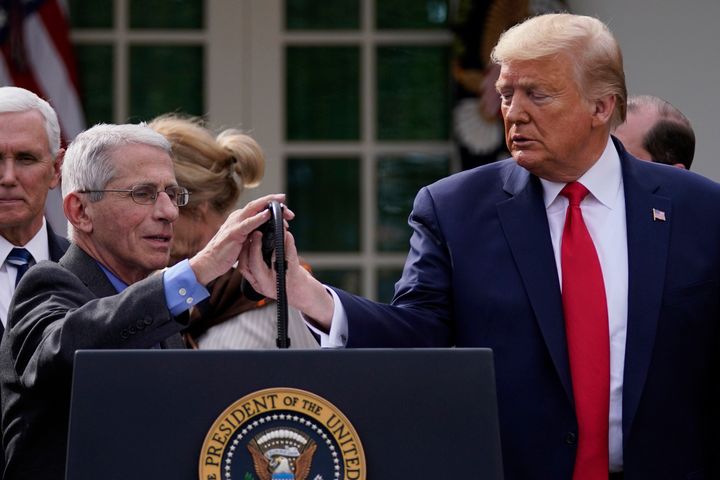 Trump also said he hasn’t shown symptoms of coronavirus, which include fever, shortness of breath and cough, according to the CDC. It could take two to 14 days for an infected person to exhibit even mild symptoms, and research suggests that on average it takes about five days.

“An individual may think nothing of these symptoms because they do not significantly change or impact their daily lives,” Eudene Harry, a board-certified physician in emergency medicine and medical director for the Oasis Wellness & Rejuvenation Center in Orlando, Florida, previously told HuffPost.

The CDC recommends anyone who has been exposed to a confirmed case of coronavirus to quarantine if they are in a “high-risk” group, even if they are asymptomatic. Older adults are considered high-risk; Trump is 73 years old.

When CBS’s Weijia Jiang asked Trump Friday if it’s “selfish” for him to bypass a test, Trump said he would “most likely” be tested, but not because he’d been around someone with the virus.