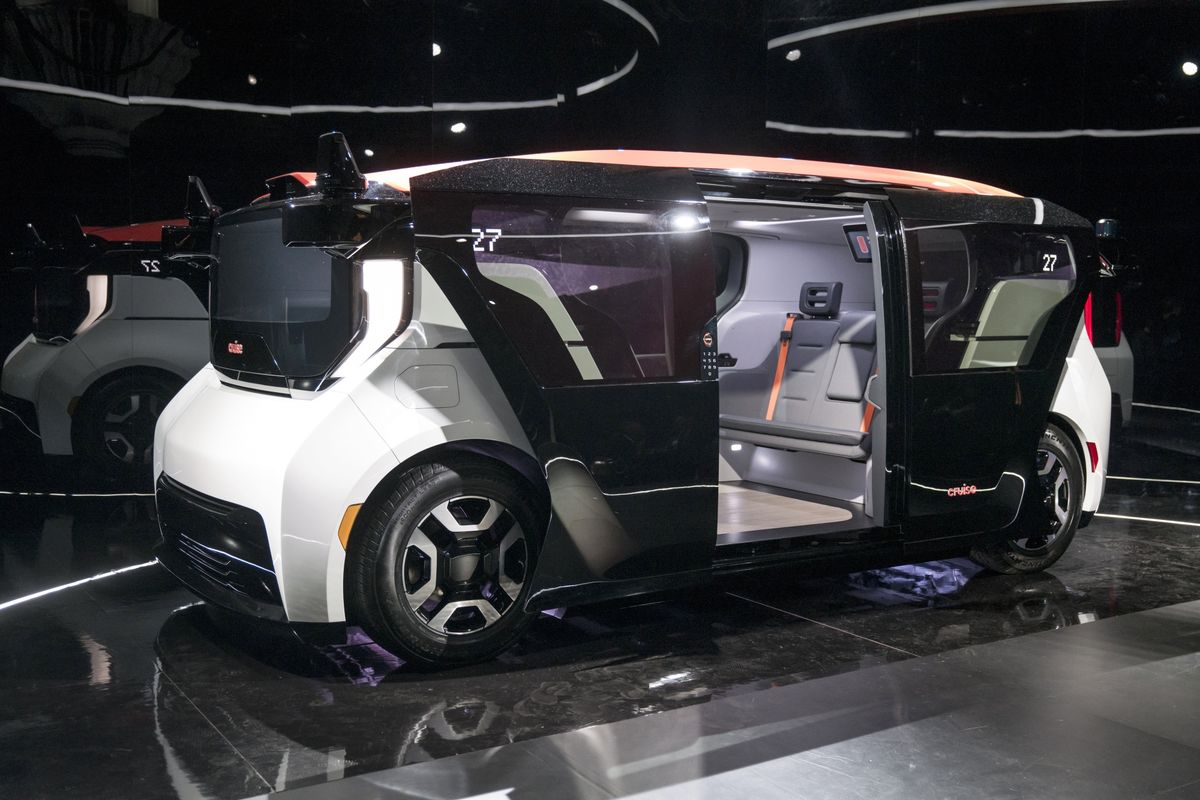 Driverless Cars Have Arrived, and They All Look Like Loaves of Bread

Do automakers investing billions in the self-driving cars of tomorrow risk repeating the same mistake they made with electric cars a decade ago?

Cutting-edge robotic people-movers from the likes of General Motors Co., Toyota Motor Corp. and Jaguar Land Rover all share similarly rectangular dimensions with more of an eye toward engineering practicality than sex appeal. Even Waymo, the self-driving arm of Google parent Alphabet Inc., has chosen the lowly minivan as its primary ride for self-driving vehicles.

The uniform and uninspiring looks of these autonomous vehicles are coming under criticism for being as much of a turn-off as the no-frills approach automakers took to designing EVs that ended up being slower sellers than hoped. One prominent industry observer ruefully noted in a newsletter recently: “We have collectively arrived at ‘bread loaf’ as the dominant design language for AV concepts.”

More than aesthetics are at stake. While the shuttles these companies have cooked up aren’t meant for retail showrooms, their lack of panache could turn away riders whose driverless dreams had more imagination than a modern-day caboose. To defray costs, even multi-passenger autonomous vehicles will need to charge premium prices over other forms of public transport. Some think they may need to look more like an upscale limousine than a gussied-up city bus.

“Who is asking for all of these boxes?” said Tony Posawatz, a former GM executive who developed the Chevrolet Volt plug-in hybird and now consults for mobility companies. “If the early users are affluent people, they are used to a certain badge and a certain kind of performance.”

Not all automakers are following the same playbook. Daimler AG’s Mercedes-Benz showcased an ultra-luxurious self-driving concept car called the F 015 in January, though it isn’t aimed at a mass-market audience. Tesla Inc. has vowed to bring autonomy to the masses with the Model 3, but for all the progress Chief Executive Officer Elon Musk is making in other regards, he continues to leave customers wanting with regard to making the controversial Autopilot system as capable as he’s predicted.

The increasingly typical AV offerings are toolbox-shaped autos like the Origin shuttle shown recently by GM’s Cruise LLC, the Toyota e-Palette set to debut at the Tokyo Olympics this summer, and JLR’s Project Vector, a preview of vehicles the Tata Group unit expects to be road testing by 2021.

Startup Zoox Inc. has so far shown only concept car frames, but they’re similar in shape to the May Mobility shuttles running around cities in Michigan and Rhode Island, built to putter along at slower speeds.

“You squint your eyes and they all kind of look alike,” said Reilly Brennan, general partner at venture capital fund Trucks VC and author of the newsletter containing the bread loaf quip. “There’s much greater room for design character than what we’re seeing,” he said, adding that some aspects are functional necessities, like passenger-friendly sliding doors and rounded corners for sensors.

Automakers are aware it’s already a tough sell to persuade people to abandon traditional cars with steering wheels and the freedom to ride solo.

When asked by an event moderator at a recent investor conference what is the biggest obstacles to AVs outside of technical challenges, Dan Ammann, the former GM president who now runs Cruise, said the business case for them could be undercut if potential customers don’t think they’re appealing enough to park their current daily driver.

“For the average person in the street today, there’s still a view that self-driving — and you said it in your opening remarks — is this thing that’s kind of far out there, and maybe it’s a science project,” he said. “We have an obligation as industry leaders to tell that story and build that sort of societal pull” for AVs.

The sameness also leaves room for an upstart that could do for AVs what Musk and Tesla have done with EVs: namely, beat established players with sheet metal as exciting as the powertrain.

Battery-electric vehicles like the BMW i3, Nissan Leaf and Chevy Bolt all suffered from lackluster styling, among other failings, due in part to their positioning as “compliance cars” — meaning they were built to meet government mandates, not spark demand.

“Musk deserves credit for making EVs something people want instead of simply a miles-per-gallon compliance car like the vehicles GM and other manufacturers put on the market,” said Dean Pomerleau, an independent auto consultant who helped pioneer AV technology in the 1980s. “It really has jump-started the EV industry, and now you’re seeing others playing catch-up.”

Pomerleau said most automakers are focusing their AV efforts first on solving important technology issues that take precedence over design cues and luxurious interiors. “Eventually, once it has become a commodity and everybody has solved the technical problems, you may see more differentiation in styling,” he said.

Today, the former GM vice chariman sees the future market for AVs diverging into two segments: anonymous people-movers for the masses, and bespoke private cars for well-heeled buyers. “Robotaxis will be ubiquitous in every urban market, and no one gives a damn what they look like,” Lutz said in an interview. “The other kind of autonomous vehicles will be for open spaces and real driving. They will be for individual drivers and will need more appeal.”