Elizabeth Holmes took the stand. This CNN reporter was in the courtroom

San Jose, California (CNN)Elizabeth Holmes’ defense rested its case Wednesday, shortly after the founder and former CEO of Theranos concluded her seventh day on the witness stand in her own criminal trial.

While the prosecution called 29 witnesses to testify, the defense’s case relied almost entirely on Holmes. During her testimony, she offered up a complicated, and at times seemingly contradictory, portrayal of herself while at Theranos’ helm. On the one hand, Holmes confirmed that the buck stopped with her at Theranos. On the other, she claimed she was a victim of a decade-long abusive relationship with the company’s COO, Ramesh “Sunny” Balwani, who she said tried to control nearly every aspect of her life. (Balwani’s attorneys have previously denied those allegations.)
“He impacted everything about who I was, and I don’t fully understand that,” Holmes said in a tearful testimony last week.

Holmes was the third and final witness called to the stand by the defense, following a paralegal for the law firm representing Holmes and a former Theranos board member who joined after its downfall had begun. 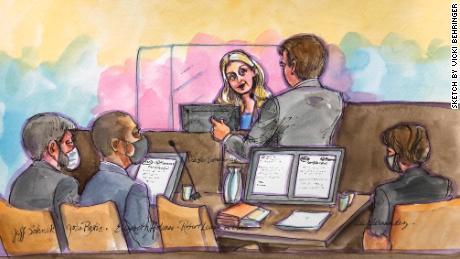 Holmes, 37, was once upheld as a rare female founder whose startup had skyrocketed to a $9 billion valuation, making herself a billionaire. Now, she’s a rare Silicon Valley entrepreneur on trial for criminal fraud, more than six years after a Wall Street Journal reporter published the first expose about the company. She faces nine counts of wire fraud and two counts of conspiracy to commit wire fraud. Holmes has pleaded not guilty and faces up to 20 years in prison and a fine of $250,000, plus restitution, for each count of wire fraud and each conspiracy count.

When she got off the stand, Holmes looked at the jury as she slowly walked away. Following the defense resting its case, the government indicated it would not put on a rebuttal case.
After conferring with jurors about any scheduling issues, Judge Edward Davila scheduled closing arguments for December 16 and December 17. Jury deliberations may then begin as soon as December 17.

During direct questioning by her lawyers, Holmes addressed some key points raised during the prosecution’s 11-week case against her, as it seeks to prove she deliberately deceived investors, patients and doctors in order to take their money and advance her company.
Under oath, Holmes acknowledged the company only ever performed 12 tests on its own devices, that she herself doctored Theranos reports by adding pharmaceutical logos to them, and that Theranos never deployed its devices with the military.
But Holmes, in confronting these points, cited her good faith explanations, which countered what jurors had heard from government witnesses. She repeatedly pointed the finger at others for their representations of the company’s capabilities and steps the company took that are under fire. At times, she expressed some contrition, or completely denied earlier witness testimonies.
She testified that Theranos only ever performed a dozen tests, rather than hundreds, using its proprietary technology, but she said it was largely relying on modified third-party machines to accommodate a key retail partnership with Walgreens. The government’s witnesses had claimed that Theranos’ leaned on machines manufactured by others due to its own technological failings.
Holmes testified Theranos did not disclose its use of third-party machines to Walgreens, investors and journalists because it was a closely-held trade secret that she fought to protect, citing the advice of her counsel.
Holmes testified that Theranos devices were never deployed in Afghanistan, on military medevacs, or for use by soldiers, despite conversations and aspirations to eventually do so. Numerous witnesses during the government’s case testified that they’d been told some variation of that, and had been impressed by it. When pressed on this point by Leach, who ticked off a list of witnesses who’d testified as such, Holmes, under oath, denied this: “My testimony is that I don’t think I said that.”
Holmes also testified that she herself added logos of pharmaceutical companies to Theranos reports before circulating them to stakeholders as validations of its technology — something numerous government witnesses testified misled them into thinking those companies had prepared the reports. She expressed contrition about this decision, saying that she had heard witness testimony during this case: “I wish I had done it differently.”
According to Jessica Roth, a Cardozo Law School professor and former federal prosecutor, it can be a “credible strategy” for a defendant to acknowledge some things that may be irrefutable because it buys goodwill with the jury when objecting to others.
Jill Huntley Taylor, a jury consultant, similarly told CNN Business this approach could add to Holmes’ credibility with the jury. “It lets her control that narrative.”

An emotionally-charged moment at the trial

Perhaps the most striking aspect of Holmes’ time on the stand came as she fought back tears, testifying that she dropped out of Stanford during her sophomore year — a key part of her well-chronicled origin story — not just to start a company but also because she had been raped and was having trouble attending classes.
“I was questioning what — how I was going to be able to process that experience and what I wanted to do with my life, and I decided that I was going to build a life by building this company,” she said.
Holmes founded Theranos in 2003 at the age of 19 and spent a decade working on the company under the radar in its quest to revolutionize blood testing. By 2005, she started living with Balwani, whom she had met after graduating high school and sought business advice from. Their romantic relationship had largely been kept hidden.
She testified that Balwani’s control over her ranged from forcing her to having sex with him to prescribing her an incredibly restrictive lifestyle that he said would help her succeed in the business world. He allegedly regulated her eating, her voice and her image. He also allegedly isolated her from others. Balwani is facing the same charges as Holmes when his trial kicks off in January. He has also pleaded not guilty.
Holmes testified that Balwani didn’t control her interactions with investors, journalists, retail executives, or board members. But she said she considered him the most important adviser to her at Theranos. She also appeared to cast doubt on her own ability to see her time at the company clearly due to the psychological, emotional and sexual abuse she claims she experienced.
She testified that it was Balwani who oversaw key aspects of the company, including its lab operations and its financial projections. Asked by her defense attorney what Balwani told her about the performance of Theranos’ lab prior to the fall of 2015, when the Centers for Medicare & Medicaid Services ran an inspection, Holmes testified: “That it was one of the best labs in the world.” (The inspection’s findings would end with the license of Theranos’ California blood-testing facility being revoked and Holmes being banned from running a lab for two years.)

Holmes cited this disconnect between the inspection’s findings and Balwani’s alleged representations to her as what ultimately led to their relationship’s end. He left the company in May 2016, which Holmes positioned as an attempt to right the ship.
The testimony about her alleged abuse “can’t help but to make some jurors sympathetic to her,” Taylor said. “Strategically, it is basically suggesting to the jury that this other person was, sort of, in her head.”
Source: Read Full Article