Etsy is awash with illicit products it claims to ban, from ivory to dangerous weapons and mass-produced goods

Etsy says hand-crafted items are its “heart and soul.” But the delicately carved, miniature sculptures known as netsuke probably aren’t what it had in mind.

The often thumb-sized objects — depicting figures, animals, and the natural world and tracing back to Japan’s Edo period — were commonly made from elephant ivory, contributing to a deadly trade that drove elephants to the edge of extinction.

Today, the manufacture and sale of elephant ivory is subject to sweeping national and international prohibitions. But ivory netsuke and dozens of other products carved from elephant tusks, from jewellery to antique accessories, are readily available to buy on publicly traded online marketplace Etsy.

And it’s just one of the company’s rules that are being openly flouted by rogue sellers on the platform.

An Insider investigation identified roughly 800 listings on Etsy selling banned products, encompassing nearly every one of the site’s categories of prohibited items. From dangerous weapons to pornography, from poisonous plants to cat and dog remains, from pseudoscientific miracle cures to t-shirts bearing the Confederate flag, the marketplace is overrun by the products that it claims to ban.

And while Etsy markets itself as exclusively for handmade or vintage items, the site is awash in mass-produced products, from charging cables to massage tools, air fryers, and wholesale clothing.

Altogether, the bounty of prohibited items reveal a widespread failure in the company’s efforts to monitor its online marketplace and to enforce its own rules. The breakdown is especially striking at a time when platforms like Facebook and Twitter have faced intense scrutiny over their track records keeping unwanted content like political misinformation and hate speech off of their sites.

On Friday, the company announced that it would spend “at least” $40 million in 2021 to beef up its enforcement capabilities. Citing “an even greater responsibility to foster a safe and trusted platform” amid its pandemic-fueled user growth, Etsy said it will increase staffing and develop new tools “to enable these teams to more effectively and efficiently do their jobs.”

Missing from the announcement though was an explanation for how so many prohibited items were able to be openly sold on the site until now — and whether Etsy had failed to notice the problem, or simply neglected to take action. 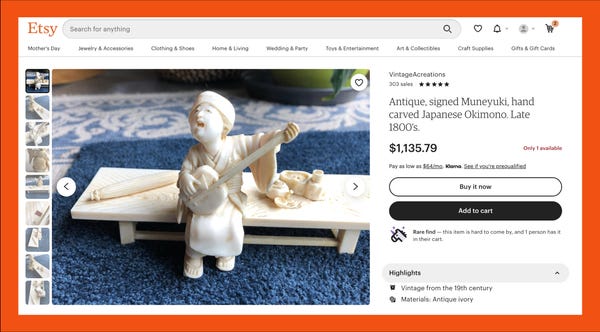 In the muddy hell of the First World War, some desperate soldiers resorted to building trench clubs: Home-made clubs adorned with spikes, nails, and bolts for bludgeoning enemy soldiers to death.

In 2021, you can buy a fully-functional steel-spiked trench club on Etsy.

It’s just one of hundreds of dangerous weapons that have been sold on the online marketplace. Banned but available products ranged from small items like a knife disguised as a necklace to brass knuckles; resin daggers and other defensive keychain items; pre-sharpened, carbon-forged steel spear-heads; concealed cane swords; and a four-bladed “apocalyptic ripsaw mace.”

Etsy’s rules prohibit “items that are presented as weapons or to be used to inflict violence,” while allowing exceptions for “tools” or “an unusable decorative item,” as well as “foam, rubber, or plastic reproduction weapons for training or roleplay.” Many of the historic-style weapons on Etsy however, such as medieval longswords, are shaped from metal at professional forges and tout the ability to inflict “maximum damage.” The buyer of one studded mace wrote in a review that they keep it in their truck “for easy access if it’s ever needed.”

Etsy has eight broad categories of prohibited items — from “Alcohol, Tobacco, Drugs, Drug Paraphernalia, and Medical Drugs” to “Pornography and Mature Content” — and it carries products from almost every single one of them. Through simple keyword searches based on Etsy’s Prohibited Items Policy and its Seller Policy, Insider identified hundreds of rule-breaking listings that made little or no attempt to disguise what they sold.

The company does not allow “items made from cat and dog parts or pelts,” but it sold domestic cat skulls, the mummified remains of goldendoodle puppies, and the preserved fetuses of unborn kittens.

Etsy says it bans tobacco products, but sells dried tobacco. It listed T-shirts and license plates with the Confederate flag, despite a ban on the slave state’s symbol. It claims to ban vehicles, but listed vintage cars, Ford ambulances, and a $20,000 wood-carved, fully functional electric motorbike. Prohibited drug paraphernalia like roach clips and dab tools are available in their hundreds. Hardcore pornography is for sale, in violation of Etsy’s rules. And despite a ban on radioactive material, it even sold uranium ore. 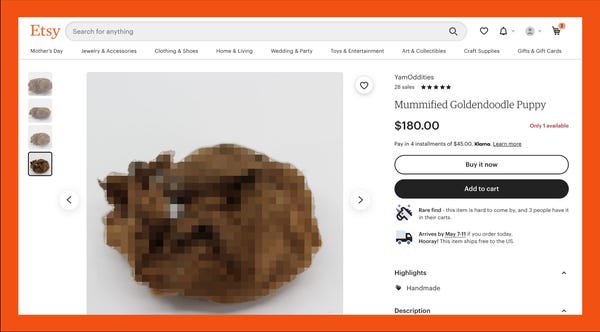 Pseudoscientific claims are common on Etsy’s marketplace, despite being banned, with dubious alternative remedies promising to tackle tumors, COVID-19, erectile dysfunction and other ailments. Illicit weight-loss products are also common. And for the supernaturally inclined, the marketplace is also awash with magical “spells” varyingly promising wealth, love, health, and gainful employment. Etsy says it bans spells promising “metaphysical outcomes,” but some sellers have racked up thousands of sales from credulous customers, with premium magical rituals costing hundreds of dollars each.

And clearly fake, counterfeit products, such as clothing and iPhone cases with the logos of designer brands like Louis Vuitton, Yves Saint Laurent, and Gucci are widely available.

Many of the offending listings pay Etsy for advertising to boost their ranking in internal search results, and the company takes a 3-5% cut of every sale — meaning it directly profits from the marketing and sale of ivory, weapons, and other problematic products.

Etsy describes itself as an “unjuried” marketplace, meaning that it doesn’t directly handle any of the goods sold on its platform and sellers are responsible for abiding by its rules. The company said in a statement that it’s always working to improve its system to prevent inappropriate items from appearing on the site through a combination of automated and manual tools, as well as user reporting.

A surge in pandemic shopping has brought mass-produced products

Since the pandemic began more than a year ago, Etsy’s site has been flooded with activity, as homebound consumers shopped online and sellers rushed to meet the demand.

The company’s annual revenues jumped 111% to $1.7 billion in 2020, and the number of items listed for sales on its site swelled to 92 million.

Billing itself as less corporate than Amazon but more structured than Ebay or Craigslist, Etsy has tapped a valuable segment of online commerce, giving small merchants a way to sell their unique items: Jewellery, art, fashion, toys, homewear, crafting gear, greeting cards, vintage finds, and beyond. “Everything listed for sale on Etsy must be handmade, vintage, or a craft supply,” the company’s rules state.

In many cases, different sellers appear to have bought the same item from a supplier in bulk to resell, with slight variations in marketing materials and descriptions (a business model called “dropshipping”), while falsely describing the item as handmade. When sellers work with a third-party “production partner,” they are required to disclose the name, location, and role of this partner — another requirement that is regularly flouted. 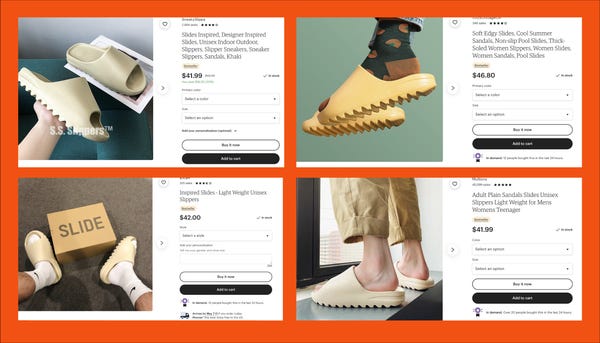 Etsy said the “exponential growth” of its marketplace in 2020 had resulted in a 400% increase in reports of noncompliant listings, with violations of its handmade policy the most common.

While many of the listings found by Insider were clearly mass-produced goods, Etsy stressed that the handmade category is inherently nuanced and more challenging  to enforce.

“A handmade item can be something that was completely crafted using only an artist’s own two hands, or it can be an item that was custom designed by a creative entrepreneur who then uses a partner to help with production,” the company said.

Content moderation has been a longstanding struggle for tech giants. Social media companies such as Facebook, YouTube, and Twitter which have come under fire for allowing everything from pornography to gory videos to find its way on their sites.

Facebook spends billions annually on trust and security issues, and has 35,000 staffers variously working to safeguard users’ security, monitor posts, and develop AI tools to flag forbidden content — an effort that has had mixed results. Earlier this month, Insider reported that users on Facebook-owned Instagram and Snapchat regularly peddle prescription painkiller pills and opioids on the platforms, with numerous buyers dying after ingesting fentanyl-laced pills.

While the hundreds of items Insider discovered on Etsy violate the company’s own rules, they don’t necessarily violate the law.

The legality of weapons depends on the item and jurisdiction. In New York, where Etsy is headquartered, knuckledusters and cane swords are illegal, as is the case in California. Traditional swords, however, are not illegal in either state.

A variety of poisonous plants that Insider found for sale on Etsy, like dried mandrake root ($5.95 for an ounce), which can cause delirium,vomiting, dizziness, diarrhea, and death if consumed, and Deadly Nightshade ($11.78 for a bag of seeds) are not illegal to buy or sell in the US. Indeed, many other retailers stock them.

But Etsy’s failure to enforce so many of its own rules (it prohibits the sale of plant materials that have “unreasonable risk of harm due to their toxic, caustic, or poisonous properties”) is striking. 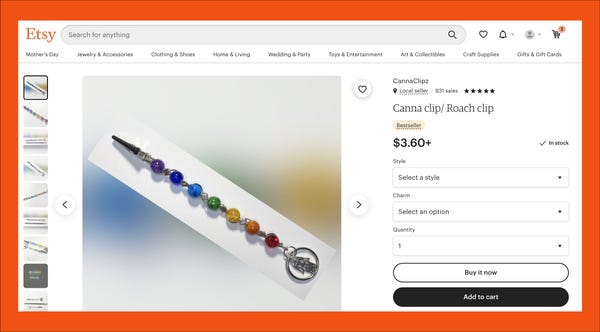 According to Etsy, the company has nearly doubled the size of its Trust and Safety team over the past two years, and created a special engineering team at the start of 2020 tasked with developing computer vision tools to detect prohibited items. (The company has roughly 1,400 employees in total.)

As part of its plan to invest at least $40 million in 2021 to expand enforcement, Etsy said it will expand the coverage of its content review teams tenfold by the end of the year, “evolve” its policies, and roll out new tools like image recognition and geo-based listing suppression to abide by laws in different places. The company already appears to have had success in limited areas: There isn’t alcohol or drugs readily available to buy on the marketplace, for example.

Etsy has previously faced limited scrutiny over content moderation failures. The Verge recently reported that it was serving up topless images of women alongside searches for “Asian.”  And in February 2021, The Markup found that it was selling banned ammunition magazines, some branded with anti-government militia symbols.

Insider found there were still some gun parts available for sale, including AR-15 handguards, muzzle brakes, flechette darts, and spent rounds. Etsy’s spokesperson said that some of these items are technically allowed under its current policies, but that the company is planning to expand its rules to ban them.

There are still countless rule-breaking items

Etsy deleted hundreds of rule-breaking listings flagged by Insider. But as of writing, it’s still easy to find many more prohibited products.

It suggests that while Etsy has responded to the specific flagged items, they were just a slice of what is available, and it is struggling to moderate its marketplace more broadly. 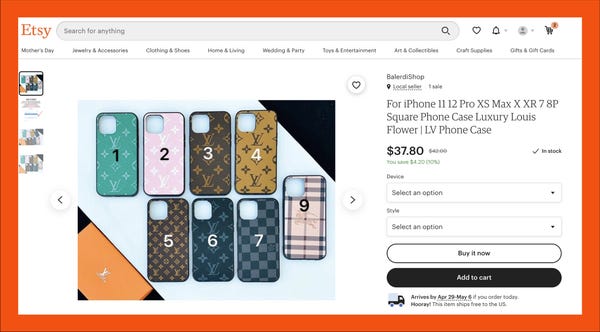 And then there’s ivory.

Sale of ivory in the United States is sometimes (though not always) illegal, but Etsy’s ban is supposedly absolute. Back in 2013, the company wrote in a blog post that the dangers of selling even purportedly “legal” antique ivory and other endangered animal products was far too high. “The risk that the legal status of these items may be unknown or mislabeled is too great,” Etsy warned, “and continued sale of these items, though potentially legal, stands to perpetuate market demand and further jeopardize the existence of these species.”

An Etsy spokesperson said that its existing systems for detecting ivory had been malfunctioning, that it fixed the problem after realizing, and promptly deleted the listings.

But even after that, Insider was able to identify a swathe of additional ivory products still available to buy on Etsy, from an antique brooch to a $1,295 Congolese horn, a calligraphy set, and a Japanese miniature carving of a snow lion.