Fox News correspondent Laura Ingle reports on those honoring the victims of 9/11 20 years after the attacks.

The document was released exactly 20 years after the 9/11 terrorist attacks and days after President Biden requested a declassification review from the FBI and other government agencies related to the tragedy.

The document summarizes an FBI interview conducted in 2015 with a Saudi man applying for U.S. citizenship who had frequent contact with other Saudi nationals in the U.S. who provided “significant logistical support” to the first hijackers arriving in the country.

Some of the 9/11 victims’ families have been hoping for years for documentation to help them in a potential lawsuit against the Saudi government, alleging it supported the hijackers. But while the document details the contacts the hijackers had with Saudi associates in the U.S., it doesn’t provide proof that senior Saudi government officials were complicit in the plot.

Saudia Arabia has consistently denied involvement in the attacks and the Saudi Embassy in Washington said it supports the full declassification of all records as a way to “end the baseless allegations against the Kingdom once and for all.”

Fifteen of the 19 hijackers were Saudis and Usama bin Laden was born in the country.

Jim Kreindler, a lawyer for the victims’ relatives, said in a statement that “the findings and conclusions in this FBI investigation validate the arguments we have made in the litigation regarding the Saudi government’s responsibility for the 9/11 attacks. 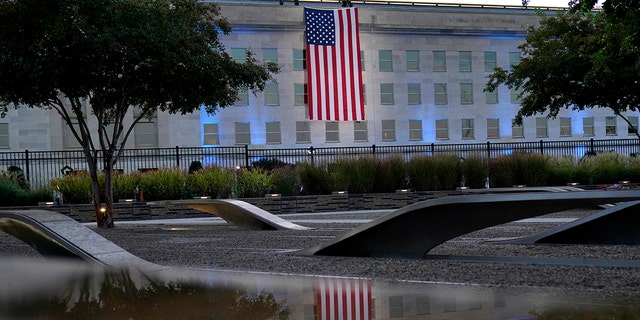 An American flag is unfurled at the Pentagon in Washington, Saturday, Sept. 11, 2021, at sunrise on the morning of the 20th anniversary of the terrorist attacks. (Associated Press)

“This document, together with the public evidence gathered to date, provides a blueprint for how (al Qaeda) operated inside the US with the active, knowing support of the Saudi government,” he said.

Hijackers Nawaf al-Hazmi and Khalid al-Mihdhar were helped in finding an apartment in San Diego by Omar al-Bayoumi, a Saudi national with links to the government, when they first arrived in the U.S. in 2000. Al-Bayoumi said they met in a “chance encounter” at a restaurant before he helped them. Bayoumi was known to the Saudi national whose FBI interview was the basis of Saturday’s document release.

During the interview, the FBI made multiple attempts to ascertain if that characterization was accurate or if it had actually been arranged in advance, according to the document.

Saudi Arabia is a U.S. ally, especially on counterterrorism issues, but the relationship has been strained recently – particularly by the 2018 murder of writer Jamal Khashoggi. Earlier this year, the Biden administration implicated Saudi leader Crown Prince Mohammed bin Salman in Khashoggi’s death. The U.S. didn’t seek any punishment against the crown prince.

Despite an investigation of Saudi officials after 9/11, the 9/11 Commission report found “no evidence that the Saudi government as an institution or senior Saudi officials individually funded” the hijackers. Money could have been funneled to al Qaeda through Saudi-linked charities, the 2004 report concluded.