Energy giant Woodside has reported a 19 per cent jump in third-quarter revenue to $US1.5 billion ($2 billion) thanks to surging gas and oil prices, but revealed a dramatic cut in the estimated reserves of its Wheatstone LNG Project.

Woodside CEO Meg O’Neill said revenue from LNG sales in the three months through September had jumped 27 per cent from the second quarter, despite planned maintenance activities at the North West Shelf and Pluto LNG projects, and flagged the strong prices would continue to boost results in the December quarter. 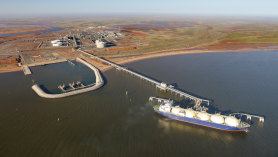 Gas reserves at Woodside’s Wheatstone Project fields off the WA coast are lower than previously assumed.

“We expect in the fourth quarter to see the benefit of stronger pricing on our realised prices, reflecting the oil price lag in many of our contracts and recent increases in gas hub prices,” Ms O’Neil said in a statement to the ASX on Thursday. “Global oil and gas prices have continued their upward trajectory, underlining the rebound in demand as economic activity has picked up in Asia and elsewhere.”

About 15 per cent of Woodside’s production is sold on the spot market, allowing the company to reap the full benefits of the current high prices.

But the long-term outlook for production from its high-profile Wheatstone Project off the coast of Western Australia was less positive.

But the company warned in its update the size of the gas reserves of Julimar and Brunello fields was far lower than previously assumed.

Reservoir studies based on seismic well performance and well drilling results have shrunk the fields’ proved developed reserves from 54.5 million barrels of oil equivalent (MMboe) to just 11.5 MMboe, Woodside said, with proved total reserves now seen at 113MMboe, down from its 154 MMboe estimate previously. Proved plus probable, or 2P, developed reserves were reduced to 26 MMboe, less than a third of the previously estimated 86 MMboe, and the estimate for 2P total reserves was adjusted from 231 MMboe to 168 MMboe.

The remainder of the Julimar and Brunello fields is owned by Kuwaiti national oil company KUFPEC. The Chevron-operated Wheatstone-Iago field, which supplies most of the gas to the 8.9 million-tonnes-a-year LNG plant, is not affected by Woodside’s announcement.

Woodside said it was progressing with its planned acquisition of BHP’s oil and gas assets, and expects to finalise the deal in the June quarter next year.