Gen. Milley honors US troops who served in Afghanistan, 9/11 victims: 'Your sacrifice was not in vain'

Joint Chiefs Chairman Gen. Mark Milley honored the 20-year anniversary of the Sept. 11, 2001 attacks Saturday at the Pentagon, reflecting on the sacrifices made in response to the deadly day and assuring Americans “your sacrifice was not in vain.”

The general reflected on the U.S. War on Terror that has since ensued and acknowledged that the U.S. faces the same threats from extremism today, as it did 20 years ago.

“All of the values and principles embedded in our Constitution and made real in our daily lives were paid for with the blood of the fallen on this place at 9:37 a.m. on September 11, 2001,” the general said speaking from the memorial of where a plane left a gaping hole after it struck the Pentagon. 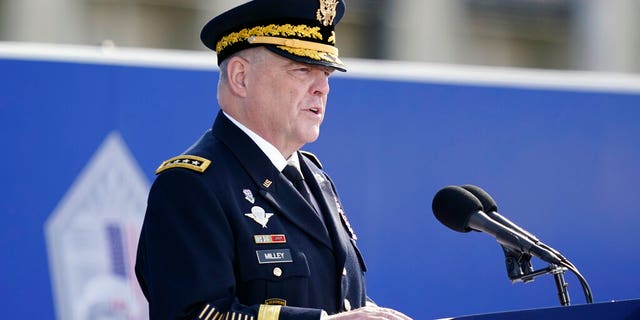 Joint Chiefs Chairman Gen. Mark Milley, speaks during an observance ceremony at the Pentagon in Washington, Saturday, Sept. 11, 2021, on the morning of the 20th anniversary of the terrorist attacks. (AP Photo/Alex Brandon)

“Those ideas were and still are hated by our enemies, the fascists, the Nazis, the Communists, al-Qaeda, ISIS, the Taliban, authoritarians, dictators and tyrants of all kinds,” he continued. “They hate those ideas.”

Nearly 3,000 people were killed in the attacks on 9/11 after al Qaeda terrorists hijacked four planes – two of which pulverized the Twin Towers in Manhattan, one hit the Pentagon and one that never reached its destination after passengers aboard United Airlines Flight 93 downed the plane in Pennsylvania.

“We remember them today for not only who they were, but what they could have become. They were irreplaceable,” Milley said. “But we the living, we have a solemn duty to honor their memory, their legacy, to honor and remember them not just today, but every day.”

The general pointed to not only the loss of life that Americans have since mourned, but to the way the U.S. united around the need to counter terrorism at home and abroad.

“They tried to destroy us. They tried to divide us, and they tried ultimately in vain, to terrify us,” Milley said. “But their murderous intent was never realized.

“We did not fear what was in front of us because we loved what was behind us,” he added, reflecting on the 20-year long war that ensued in the wake of 9/11.

The general also honored the men and women who have died in the U.S. fight against terrorism, including the 13 service members who were killed last month in the mass evacuation from Afghanistan – five of whom were born the same year as the 9/11 attacks.

“Never forget the sons and daughters, the brothers and sisters and the mothers and fathers who gave their tomorrows for today,” Milley concluded. “Honor them, honor them today and forever.”