Australia’s richest woman Gina Rinehart has said humans do not cause global warming and warned against climate change “propaganda” in a speech to students at her old school.

The iron ore billionaire said the students at St Hilda’s in leafy upmarket Mosman Park in Perth were “overwhelmed by media and propaganda” regarding climate change and urged them to “research for the facts”.

Mrs Rinehart said the girls should consider influences such as the sun’s orbit, volcanoes and “other scientific facts that I had the benefit of learning when I was at school”.

She said as the globe had heated and cooled in the past, global warming was not caused by humans.

Mrs Rinehart has made most of her wealth through fossil fuels, mainly through her company Hancock Prospecting which owns 70 per cent of iron ore miner Roy Hill. Her comments contrast with moves by the nation’s biggest listed mining companies to adopt climate-friendly positions and strict carbon reduction targets.

‘Please be very careful about information spread on an emotional basis, or tied to money, or egos or power-seekers.’

The climate scientist, who has been a lead author on Intergovernmental Panel on Climate Change (IPCC) reports, said humans were the dominant cause of climate change “unequivocally caused by the emissions of greenhouse gases, principally carbon dioxide from the burning of fossil fuels”.

Mrs Rinehart complained that she heard in years past students had to watch Al Gore’s climate film An Inconvenient Truth that predicted “the sad loss of polar bears” and “lots of emotional things like that to stir or frighten people”.

In the 16-minute video posted on her personal website Mrs Rinehart said she hoped St Hilda’s would “strongly guard against propaganda intruding on real education and rational thinking”. 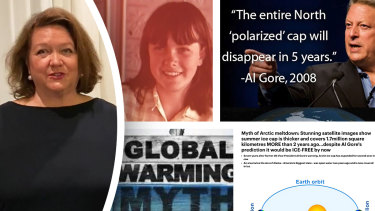 Gina Rinehart harked back to her early 1960s education to explain climate change.

She asked the student to “do their own independent research” on “which comes first, global warming, or an increase in carbon?”

The iron ore heiress finished her rejection of climate science with a call to the schoolgirls to ask “why does the media in general and those with influence now call for reducing carbon?”

“Please be very careful about information spread on an emotional basis, or tied to money, or egos or power-seekers,” Mrs Rinehart said.

The St Hilda’s old girl then praised French physicist Marie Curie’s use of the scientific approach and the leadership of former British prime minister Margaret Thatcher.

“Ms Rinehart approvingly cites the great physicist and Nobel Prize winner Marie Curie for her commitment to the scientific process but completely rejects the unequivocal finding of physics globally that the warming of the planet is due to our emissions of greenhouse gases,” Dr Hare said.

“She also cites approvingly Margaret Thatcher, which is particularly egregious as she would have had no truck at all with Rinehart’s arguments.”

Dr Hare said Mrs Thatcher was the first global leader to fully recognise the threat climate change posed and said unless curtailed it would cause “irretrievable damage to the atmosphere, to the oceans, to the earth itself.”

A St Hilda’s spokeswoman said Mrs Rinehart was invited to speak to the school’s 125th-anniversary assembly about her business experiences and her family’s connection with the school.

Ms Rinehart could not attend so sent a pre-recorded video and only the first five minutes that “did not include specific messaging about climate change” was screened.

The spokeswoman said St Hilda’s teaching of climate science followed the guidelines of the WA School Curriculum and Standards Authority.