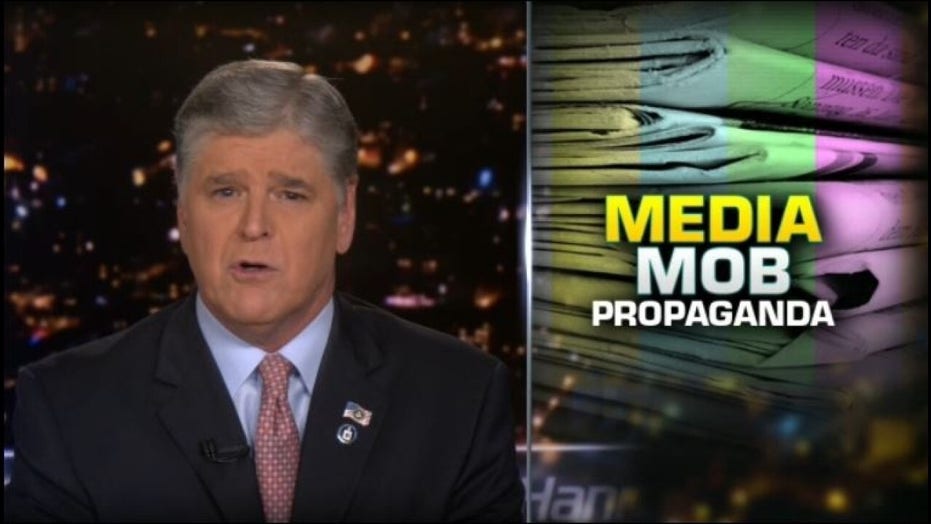 Hannity asks New York Times: Where are the retractions?

Fox News host Sean Hannity responded to a New York Times report on how investigative groups like Fusion GPS worked “hand-in-hand” with the media to fuel the Russian collusion narrative for years on “Hannity.”

HANNITY: As you can see there are no standards in the media mob, no” journalistic integrity” whatsoever. True to form, brand new report in the New York Times detailing, now this is interesting, one little article, showing how Fusion GPS and how all of these private investigative groups, the ones who do intel, they work with so-called journalists from the media mob. They work hand-in-hand intentionally. They did it to smear Donald Trump.  They used Hillary’s dirty Russia disinformation dossier that was unsourced, unverifiable, a pack of lies, but the media mob treated it as gospel. In doing so they hawked a conspiracy theory that hurt this country for three long years.

It wasn’t just fake news CNN and MSNDNC that relied on Fusion GPS and the dirty Russian disinformation, Hillary paid for, dossier. So did pretty much all of America’s top newspapers, the three major networks. By the way, ironically, that would include the New York Times. They are now suddenly reporting the illicit connection between journalists and these groups like Fusion GPS.  It was the very same New York Times that actually gave the founder of Fusion GPS, Glenn Simpson, a platform this disinformation.

It was all unverifiable garbage. It was all paid for by Hillary and the DNC, and it was all filled Russian lies and disinformation, but our media sourced it for years. So we’re asking tonight, where are the retractions? Where are the apologies? Spoiler alert, they haven’t been forthcoming and they probably never will be. Journalism, I said it in ’07, it is dead and it is buried in America.