Hannity wants to know who's actually running the White House 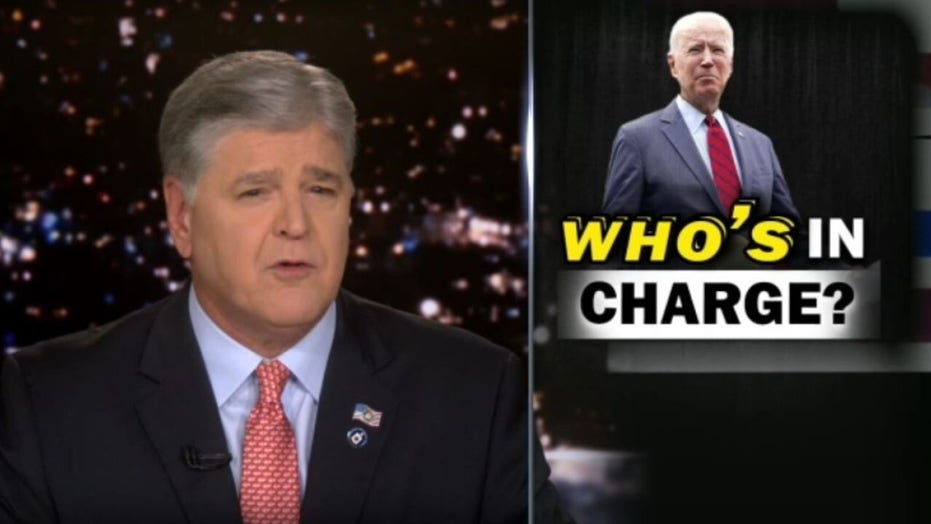 Hannity: This isn’t a joke, who’s in charge at the White House?

Fox News host Sean Hannity started his show Tuesday asking who is in charge at the White House and noting he does not believe it is Joe Biden.

Hannity cited a Trafalgar and Convention of States poll which shows 57% of people do not think Biden is fully executing his duties.

“This isn’t a joke. Who is in charge of 1600 Pennsylvania Avenue?” Hannity asked. “A majority of the American people believe that it is definitely not Joseph Biden… In other words, Joe is not making the decisions, he is not in charge. I know at times on this program I have joked about this, but honestly starting tonight, this stops, that stops. This is not a joking matter.”

Hannity went on to say that is “obvious” that the president is cognitively declining and everyone is picking up on it.

“Not only the [United States] sees it, our enemies see it and this cannot be good for anyone. According to this poll, look at these numbers, 58% of independents, they see it. Even 32% of Democrats understand Joe’s not really the one in charge. That’s right, a third of voters, Joe’s own party believe, Joe is not capable of executing his duties in the Office of President.”

Hannity argued that Biden’s ability to lead had not only domestic implications, but it impacts foreign policy as well. Over the past few months, Russian actors have enacted ransomware attacks on the United States and China has sent warning shots as their aggression increases.

Hannity expressed his concerns saying, “Every hostile actor, every hostile regime in the world they’re studying him every day and they’re also becoming more emboldened every day.”

After analyzing Biden’s latest concerning actions, Hannity wondered why the media is failing to report on it and slammed them for protecting the president.

“No one in the media mob is going to hold Biden accountable, ever ask the tough question, just like no one on fake news CNN, three broadcast channels, MS*DNC*, New York Times, Washington Post, they won’t dare ask questions about the mental capabilities or lack thereof of their dear leader.”

Hannity said that during the Trump presidency, the mainstream media regularly discussed invoking the 25th Amendment and demanded Trump take a cognitive test, but have fallen silent on Biden.

“If we applied those standards to Joe, we’d be invoking the 25th Amendment and asking him to step aside,” Hannity said. “Now despite Biden’s obvious everyday cognitive struggles, the media mob is suddenly unconcerned with the mental capabilities of the President of the United States.”