Sales at Harvey Norman's Australian and New Zealand stores have soared throughout March thanks to a surge in demand for whitegoods and home office equipment as Australians bunker down through the coronavirus pandemic.

In an update to the market this morning, the electronics retailing giant said its comparable sales between March 1 and March 17 at its local Australian stores had increased by 9.4 per cent. This marks a significant jump from its half-year results, which looked anaemic with 0.03 per cent growth. 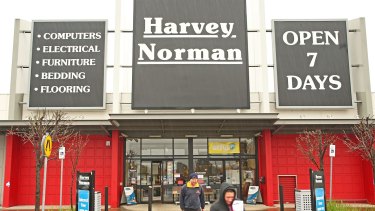 Harvey Norman has seen a run up in sales due to Australians buying up home office goods and freezers.Credit:Scott Barbour

Sales at the retailer's New Zealand and Ireland stores also grew significantly, up 12.4 per cent in NZ and up a whopping 53 per cent in Ireland.

Australians have been flocking to stores to buy items such as computer monitors, desk chairs, laptops and keyboards as the coronavirus pandemic prompts a mass working from home effort across the country's companies.

This has benefited stores such as Harvey Norman, JB Hi-Fi and Officeworks, with some inner-Melbourne JB Hi-Fi stores running out of Apple Macbooks entirely.

Chest freezers have also been a popular item at the retailer, as the virus fears have prompted some Australians to stockpile food.

Sales at Harvey Norman's Croatian, Malaysian, Singaporean and Northern Ireland stores did not fare as well as their local counterparts, with many stores shut due to government decree. Sales in Malaysia fell 5 per cent, while sales in Singapore fell 1 per cent.

As the coronavirus continues to bite, impacts on other areas of retail have varied, with small-cap retailers Lovisa and City Chic Collective releasing contrasting trading updates this morning.

Lovisa, which sells jewellery through a number of small-format stores across Australia, Asia, America, and Europe, told investors it had seen a declining trend across all its markets, with a "significant deterioration in sales". 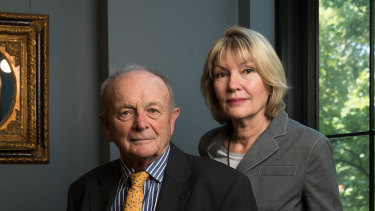 Its stores in France and Spain have remained closed since the start of the week, along with all stores in Malaysia and 25 stores in the US. The accessories retailer warned it could not reliably estimate the financial impact of the coronavirus across the coming months.

"The Lovisa business remains keenly focused on cost of doing business management and will be taking all actions available to manage both costs and cash flow during this period of uncertainty," the company said.

Meanwhile, City Chic said its comparable sales to date had stayed strong, up 8.6 per cent, largely due to the company’s recent acquisition of US online retailer Avenue, which shifted two-thirds of its sales online.

However, the company warned it would still likely see a hit to spending, and said the full-year impact was also uncertain at this stage.

Linen seller Adairs was also forced to slash its dividend and withdraw its earnings guidance as the coronavirus pandemic caused a sharp deterioration in trading conditions.